The House at Pooh Corner by A.A. Milne 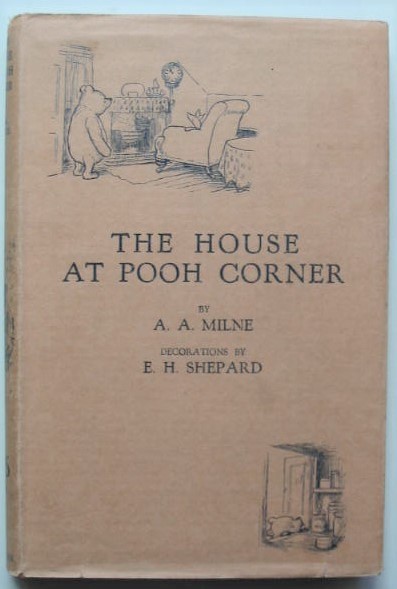 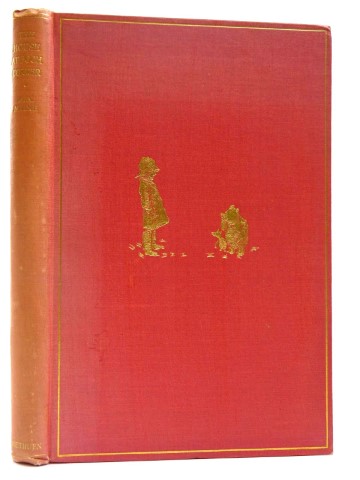 'The House at Pooh Corner' was first published by Methuen & Co. Ltd in October 1928, being the final in a quartet of books for children by A.A. Milne and illustrated by E.H. Shepard. However, it is the second volume specifically about the well loved 'bear of little brains', 'Winnie-the-Pooh' along with his friends and their many adventures in the 100 Acre Wood.

This book follows the same format as 'Winnie-the-Pooh', where almost every chapter can be read independently of each other as a shorter story; perfect for bedtime reading and for keeping a child's (or adult's) attention! In fact, in the many years since their original publication, various chapters of these popular tales have been adapted and reprinted for younger readers in separate story books.

Milne doesn't keep us in suspense about where the title of the book comes from - the first chapter of the book straight away tells the story: 'In Which a House is Built at Pooh Corner For Eeyore'. It is winter in the 100 Acre Wood and 'having nothing else to do', Pooh goes to visit Piglet. Pooh finds Piglet is not at home because Piglet is out trying to find Pooh Bear at home! So finding Piglet not at home, Pooh 'jumped up and down to keep warm, and a hum came suddenly into his head.... 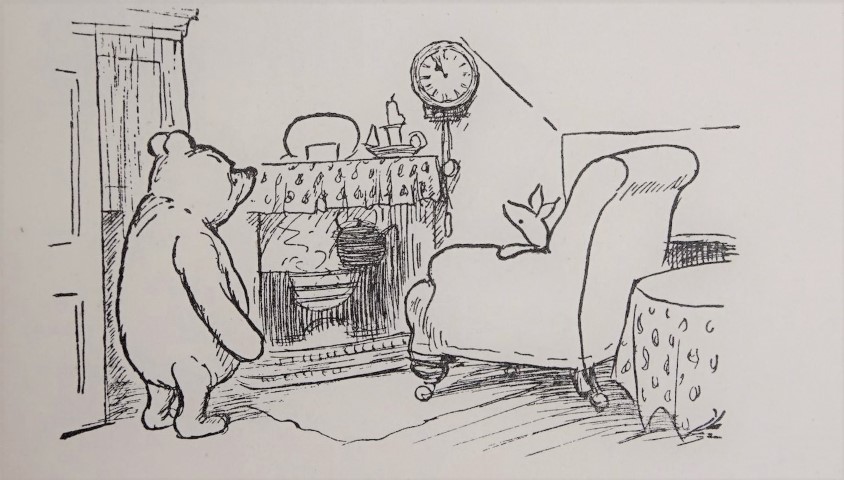 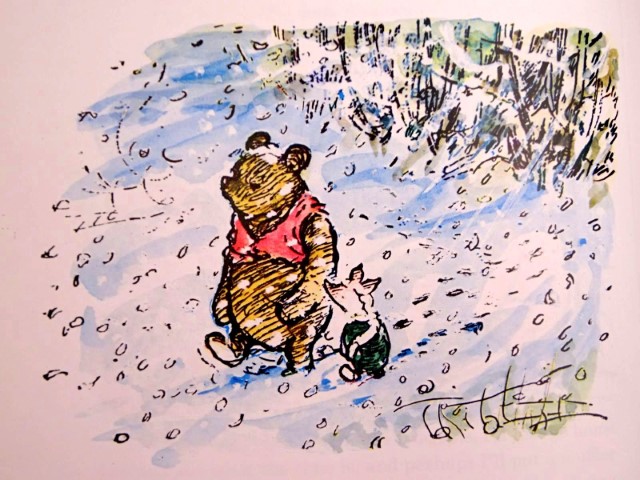 Eventually, on finding Piglet, and after a 'little smackerel of something' for elevenses, (as it's always nearly eleven o'clock in Pooh's house), Pooh teaches Piglet his new 'hum' and they brave the snow to go and sing it to Eeyore.

After much practising, to keep themselves warm, and not finding Eeyore, Pooh (after some thinking), realizes that Eeyore is the only one of their friends that doesn't have a house (only a gloomy place). This being the case, Pooh and Piglet take it upon themselves to build Eeyore a house 'by the wood, out of the wind, because this is where Pooh thought of it.' It is decided (also by Pooh), to call the place 'Pooh Corner'. While building Eeyore's house, they carry on singing the 'Outdoor Song for Snowy Weather' and this is how Christopher Robin and Eeyore find them, by following the sounds of their singing. 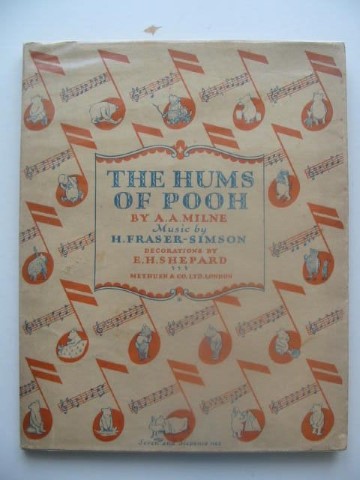 This song or hum, is just one of many that are made up and sung by Pooh throughout all his adventures over the two volumes. Many of these were collected and put to music by H. Fraser-Simson and published, also by Methuen in 1929, under the title 'The Hums of Pooh'.

Throughout 'The House at Pooh Corner', all the old loveable characters are back: Piglet, Eeyore, Rabbit, Kanga, Roo, Owl, but in chapter two, we are introduced to a bouncy new character – Tigger! For many of us who grew up with the Winnie-the-Pooh characters, how would the 100 Acre Wood be complete without the irrepressible Tigger?? His exuberant character makes you smile as he comes to the forest and has breakfast at Pooh's house, discovering 'what Tiggers like' - or more to the point, it seems - what Tiggers do NOT like. In later chapters Tigger also tries his hand at climbing trees and becomes unbounced! 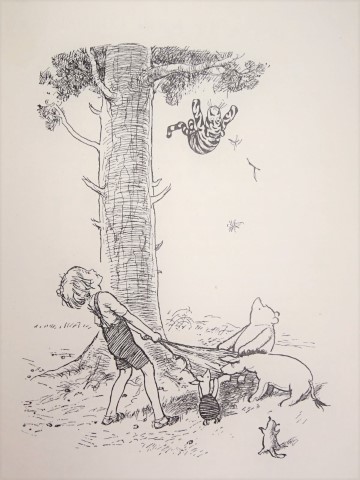 Many of the other characters also have their own adventures within the chapters of 'The House at Pooh Corner' – Piglet nearly meets a Heffalump again, Rabbit has a Busy Day, Eeyore finds the Wolery and Owl moves into it. One of my favourites is where Pooh invents a new game (Poohsticks) and Eeyore joins in. 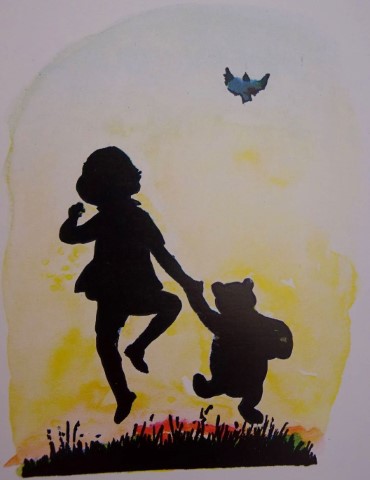 Sadly, we eventually come to the final chapter, 'In which Christopher Robin and Pooh come to an Enchanted Place, and we leave them there'. This is where we find what is, in my opinion, one of the most famous 'Pooh bear' quotes.

Christopher Robin is speaking:
'Pooh, promise you won't forget about me, ever. Not even when I'm a hundred.'
Pooh thought for a little.
'How old shall I be then?'
'Nintey-nine'.
Pooh nodded.
'I promise' he said.

Fittingly, at the completion of these stories, we are left with just the two characters we were introduced to originally - Christopher Robin and his beloved bear, Winnie-the-Pooh.

Editions of The House at Pooh Corner: 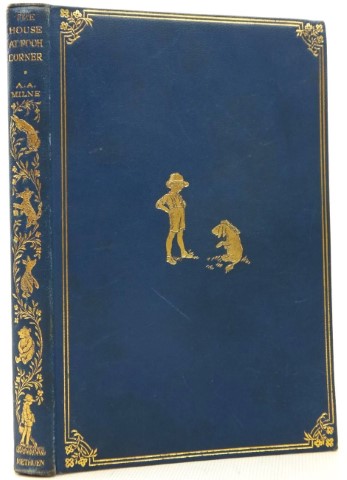 There are many editions and reprints and different bindings for this popular book. The original binding, when published in 1928, was in keeping with the other children's volumes by Milne. It was published in a salmon pink cloth with a gilt title on the spine and gilt vignettes of Christopher Robin and Pooh Bear on the front cover. Internally it contains the original line drawings by Shepard, including black-and-white endpapers showing silhouettes of the characters with the 100 Acre Wood in the background. This was all contained in a simple dustwrapper, with blue titles and small decorations of some of the characters.

The publishers also produced a so-called cheap edition in blue cloth, with gilt titles and decorations. Many other editions and reprints followed, bound in differing colour cloths. 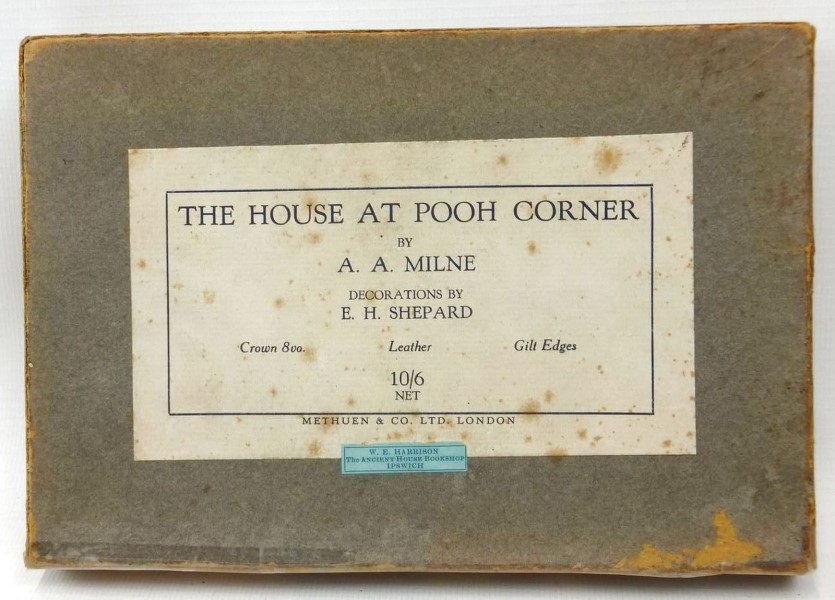 A beautiful Deluxe edition in blue leather was also released by the publisher in 1928. This has elaborate gilt decorations of the characters on the spine, with Christopher Robin and Eeyore on the front cover, a blue silk bookmark and gilt on all page edges. This edition originally came in a cardboard box with a title label on the top.

Another special edition was produced by The Cottage Bindery. They rebound the book into a beautiful vellum binding, with gilt decorations and a picture of Pooh and Christopher Robin on the front cover. 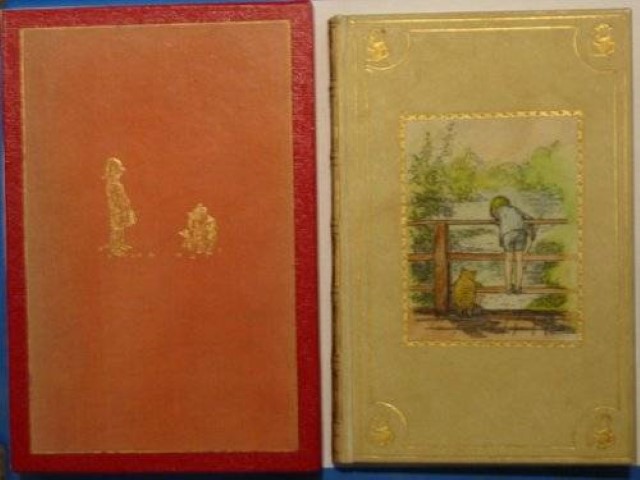 Methuen released a new version for later generations in 1974, but with the addition of colour to the original Shepard illustrations. There have also been pop-up versions of this beloved classic.