Is it just me? Or is it true, that when you live in a beautiful area, that you sometimes don't always truly see it for what it is, or take full advantage of all that is on offer?

Having lived in and around the Chepstow area all my life, and having parents that have lived here most of their lives, sometimes this is the case with me. However, when in Chepstow and its surrounding areas, there are always coachloads of tourists that have travelled great distances to absorb and marvel at the history and beauty of this place that many of us call home.

A while ago, it made me stop and think, I should be making more of an effort to enjoy and utilise these attractions on my doorstep. So that’s what I've endeavoured to do. As my husband isn't from the immediate area we've tried to visit places that, in the 13 years that he's lived here, he's never seen before. 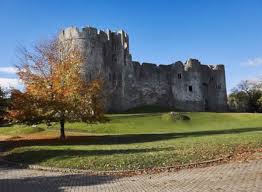 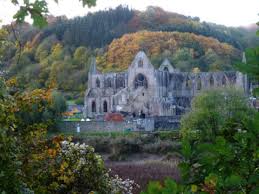 There are always the favourite places such as the village of Tintern with its impressive Abbey ruins dating back to 1131. Even though I work in Tintern, we still enjoy walking there and often visit Tintern Old Station and walk along to Brockweir Bridge, looking at the sculptures and views along the way.

In Chepstow there are many attractions, one of the biggest being the Castle, but there is now the Chepstow town walk. Along the route we find information and tiles to look at in the pavement. Not forgetting the famous historical Offa's Dyke path, of which some of its 177 miles are a popular pull to the area and beyond. For any interested in the history of Chepstow, including many of the landmarks, books by local historian Ivor Waters are still sought after in the area. See Sonia's previous article on Ivor Waters and the Chepstow Society here.

Last month (May), when the weather was fine, my husband and I took an afternoon trip to Beachley where you can see underneath the original Severn Bridge and across the water to Aust. This is also where in the past, before the bridge was opened in 1966, ferries were used to cross the water. The slipway that was used for launches is still there, but no longer used for ferries. Alongside sits the headquarters for SARA (Severn Area Rescue Association) which was the association’s first purpose built lifeboat station.

Deciding that we hadn't walked far enough, I remembered a place where our family used to go for picnics in the distant past, and from where we would start our annual charity run when I was at school. We passed by Woodcroft and Lancaut and on out to Tidenham Chase and parked our car. On one side of the road, you could walk to the Devil's Pulpit, a scenic viewpoint overlooking Tintern Abbey from where, legend has it, the Devil preached to the monks and occupants of the Abbey below.

However the place I remembered was Poors Allotment, on the opposite side of the road.

Not having been there for many years, we discovered that it is now part of a larger Nature Reserve managed by the Gloucestershire Wildlife Trust. Accessing the reserve from the B4228, you enter through the 'snake gate', a lovely wooden carved gate of which there are two (there is also the Butterfly Gate at another point in the reserve). The area was named in 1814, after the land was set aside for the use of the poor in the local parish. There is woodland and heath, with different plants and some wildlife (although not always visible), a stream and a pond. In parts there are also views over the Severn estuary, including the Severn Bridge. When we visited, the bluebells were still very much in bloom and made for a beautiful walk, even when it started raining! 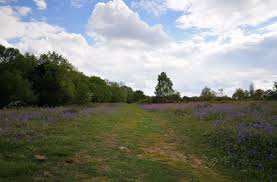 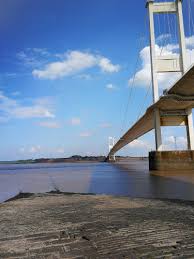 On the way home, we again passed Lancaut and Wintour's Leap, where at the end of last year I went walking with my father. Lancaut is now also a nature reserve and place of scientific interest, and like Poor's Allotment is looked after by the Gloucestershire Wildlife Trust. According to the G.W.T. Website, it is one of the four most important woodland areas in Britain, being rich in wildlife with over 350 plant species recorded and a wide range of birds around the wood and south facing cliffs, including peregrine falcon and raven. My father and I accessed the reserve via Lancaut Lane. It was fairly slippery and muddy, being winter at that time, but worth if for the stunning views of the river and the cliffs opposite, including Wintour's leap.

One of the only significant traces of the original village that can still be seen today is St. James's Church, which is now a Grade II listed building. Construction of the building dates back to the 12th century and the font, which is now located at Gloucester Cathedral, has been dated to between 1120 and 1140. There are different theories as to the settlement – one that it was linked to the Cistercian monks who founded Tintern Abbey up-river and another is that it was possibly a leper colony, due to the amount of unusual medicinal plants found in the area. 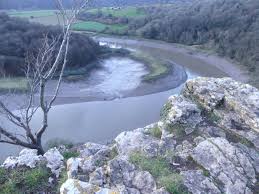 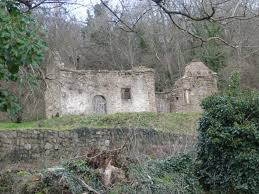 Having seen the cliffs and the river from Lancaut, we then retraced our steps and walked along the main road to the breath-taking panoramic view of the River Wye at Wintour's Leap. Now a popular climbing route and viewing point, it is named after the Royalist Sir John Wintour, who in local myth is said to have 'leapt' from the cliff. In my father's telling of the story, Sir John was heading for Lancaut to get on a ferry boat, but was being pursued by Parliamentary forces. The next thing that the Roundheads saw was that Sir John and his horse were both safely on the ferry boat crossing the river. Of course, the pursuing forces were baffled, and assumed that he must have leapt, with his horse to where they then could see him.

In reality, there is a ledge going down the cliff which, at that time, would have been wide enough for a horse and rider. It was likely this that Sir John used, showing his local area knowledge, to escape his pursuers, but the name Wintour’s Leap has remained ever since.

The most recent local place we visited was Caldicot Castle. Stella & Rose's Books recently purchased a collection of local history books and when cataloguing them I came across a small pamphlet style book on Caldicot Castle. On thinking about it, I realised that, although having been to the grounds of the Castle for picnics before, I couldn't remember actually visiting the inside of the Castle itself! 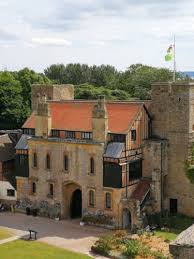 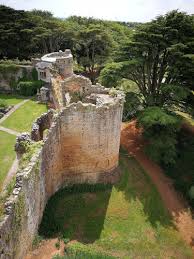 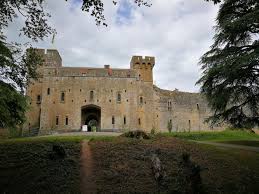 To me it seemed smaller than Chepstow Castle, which I've visited a few times over the years, but was interesting all the same. It is a stone, medieval castle, founded by the Normans, that has seen many changes over the years and some famous historical names, including the Bohun family and Thomas of Woodstock. With a visit you can trace the Castle's history, including its decline, but then its purchase and restoration by the Cobb family who took it on as the family home. Now the castle has been preserved and is available to see and enjoy by all. You can even have a medieval wedding reception here!

I'm sure there are still many more places just on our doorstep that we will continue to explore in the near future. But, why not visit our area, look around and see for yourself what is there to discover, not forgetting, of course, to visit our bookshop beside the River Wye in Tintern.

For more inspiration please see some of our previous articles about our local area:

A Walk in the Forest of Dean (by Rosemary)

The Wye Valley Railway (by Adam) 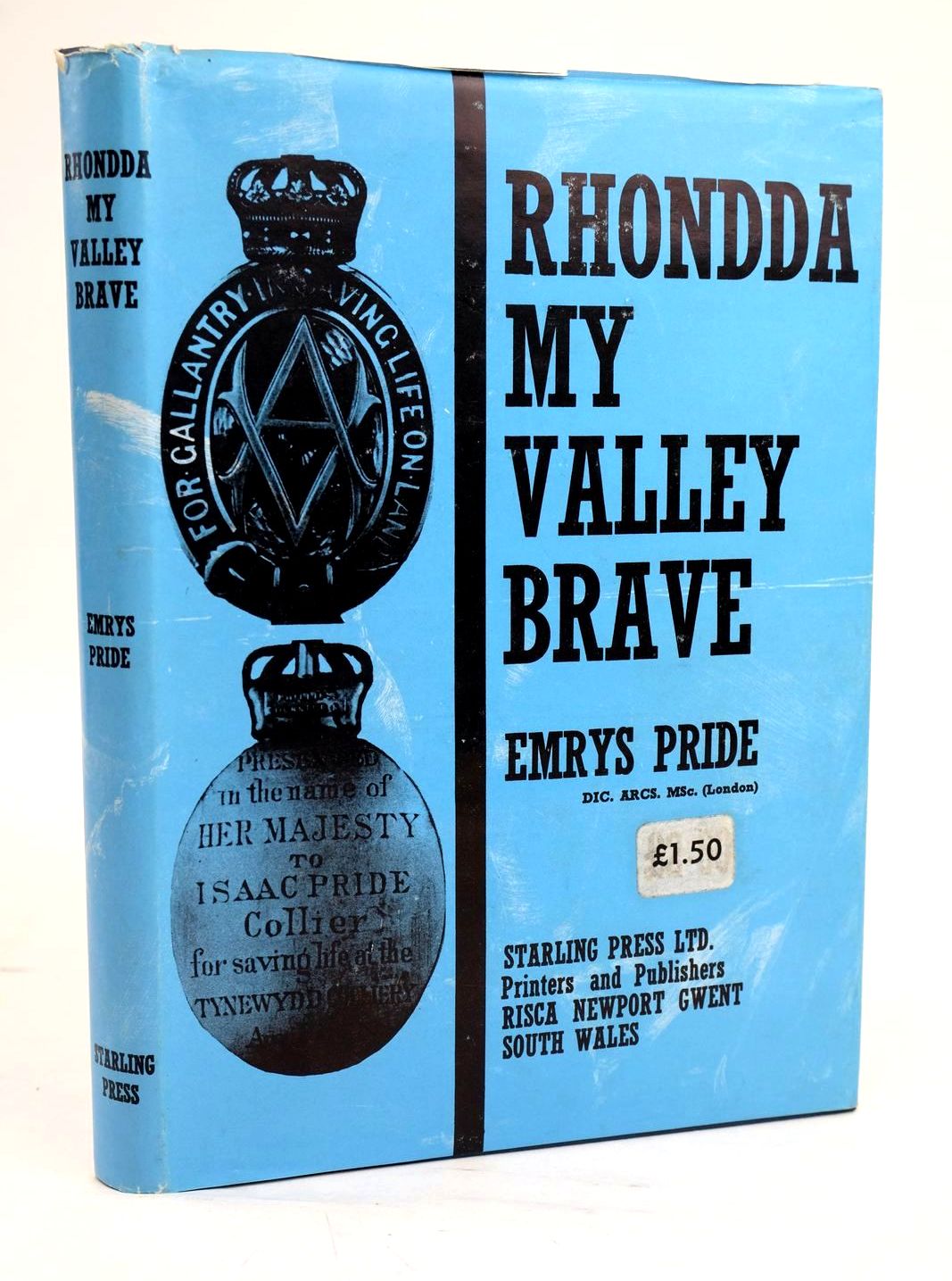 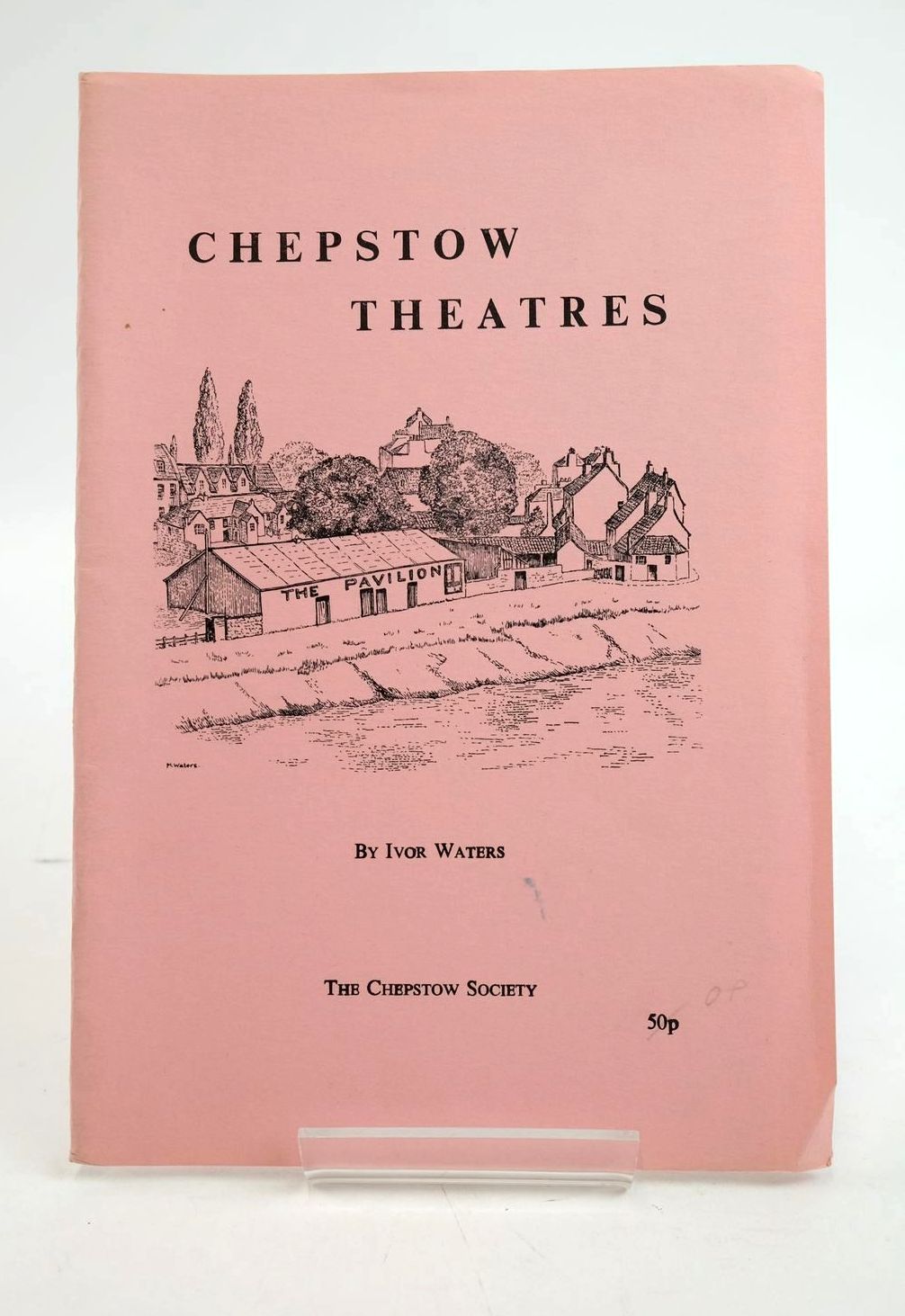 CHEPSTOW THEATRES
Written by Ivor Waters. Stock no 1319572. Published by The Chepstow Society. 1975. 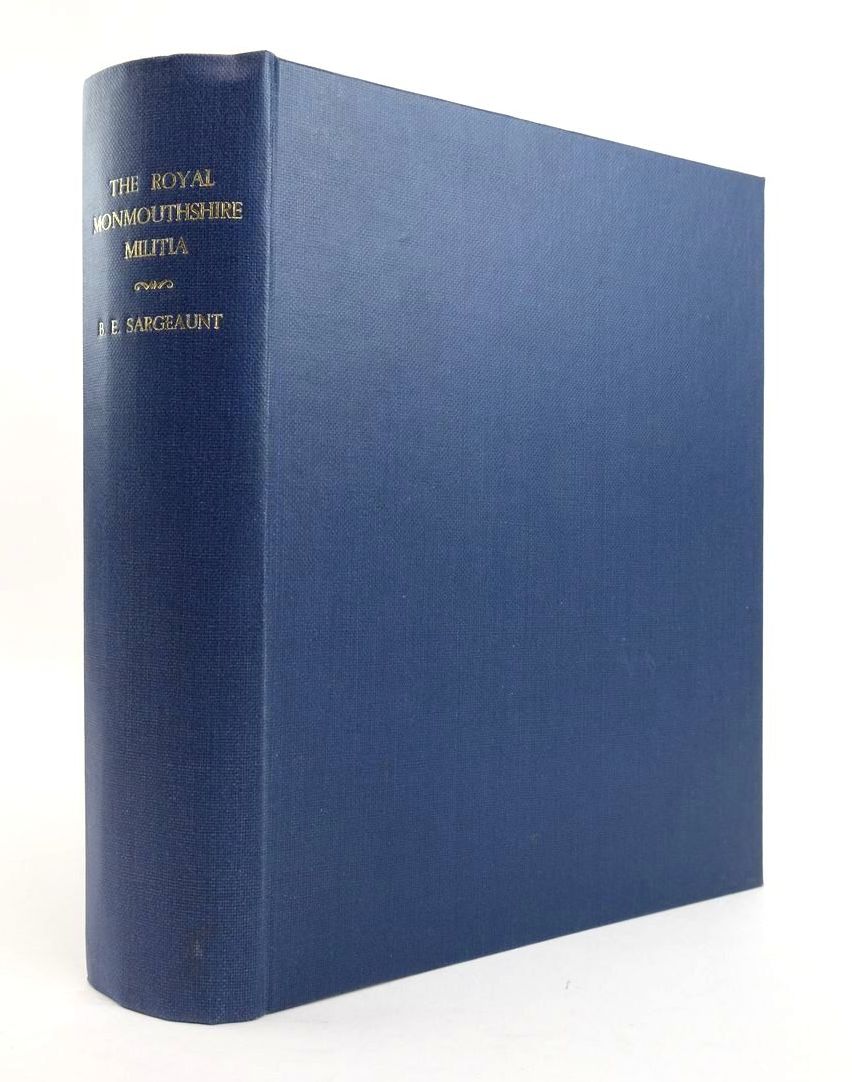 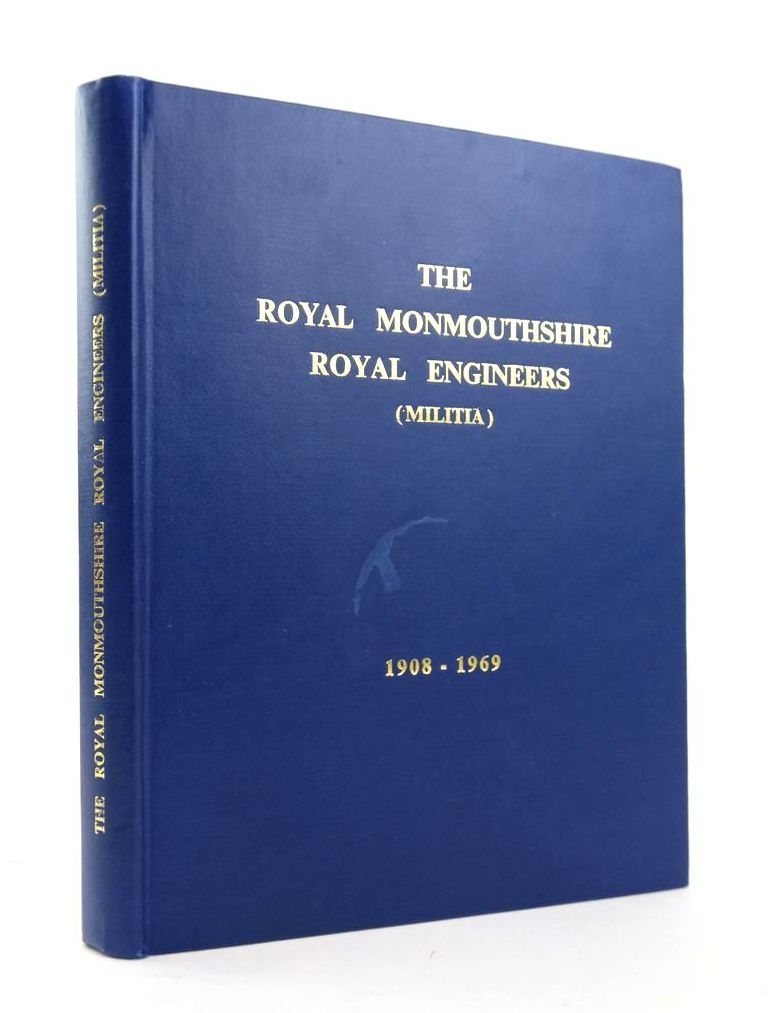 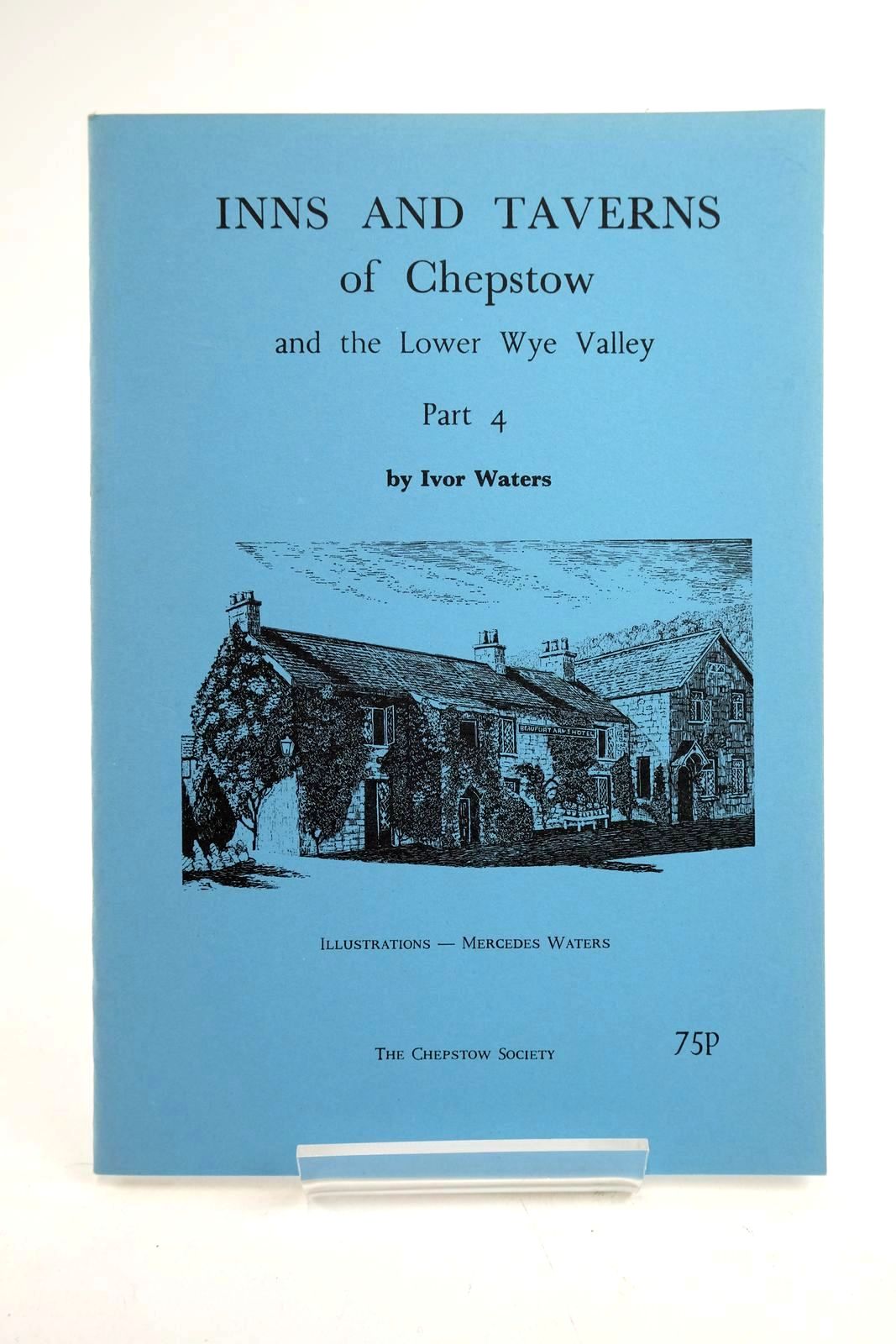 INNS AND TAVERNS OF CHEPSTOW AND THE LOWER WYE VALLEY PART 4
Written by Ivor Waters. Illustrated by Mercedes Waters. Stock no 1319535. Published by The Chepstow Society. 1976. 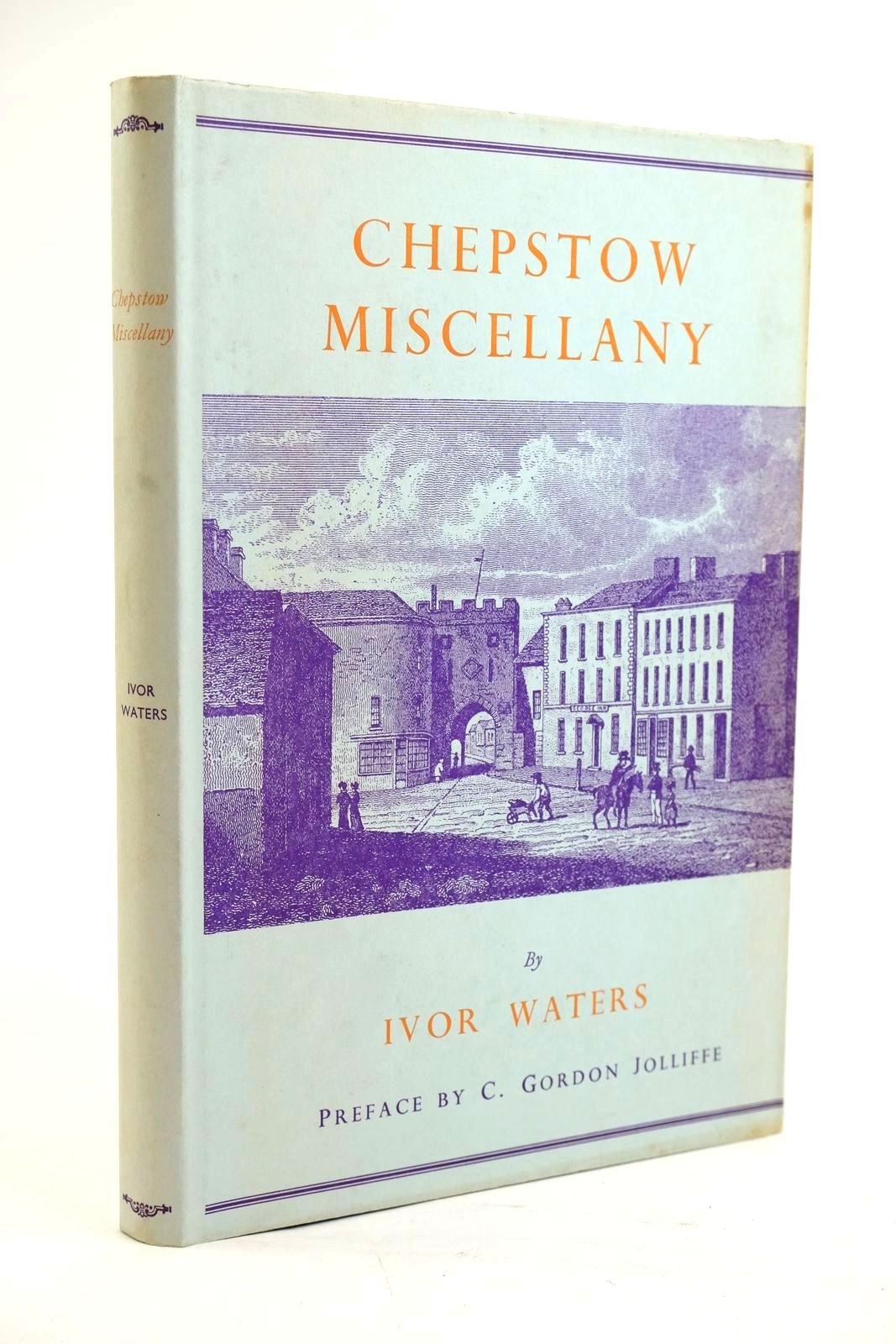 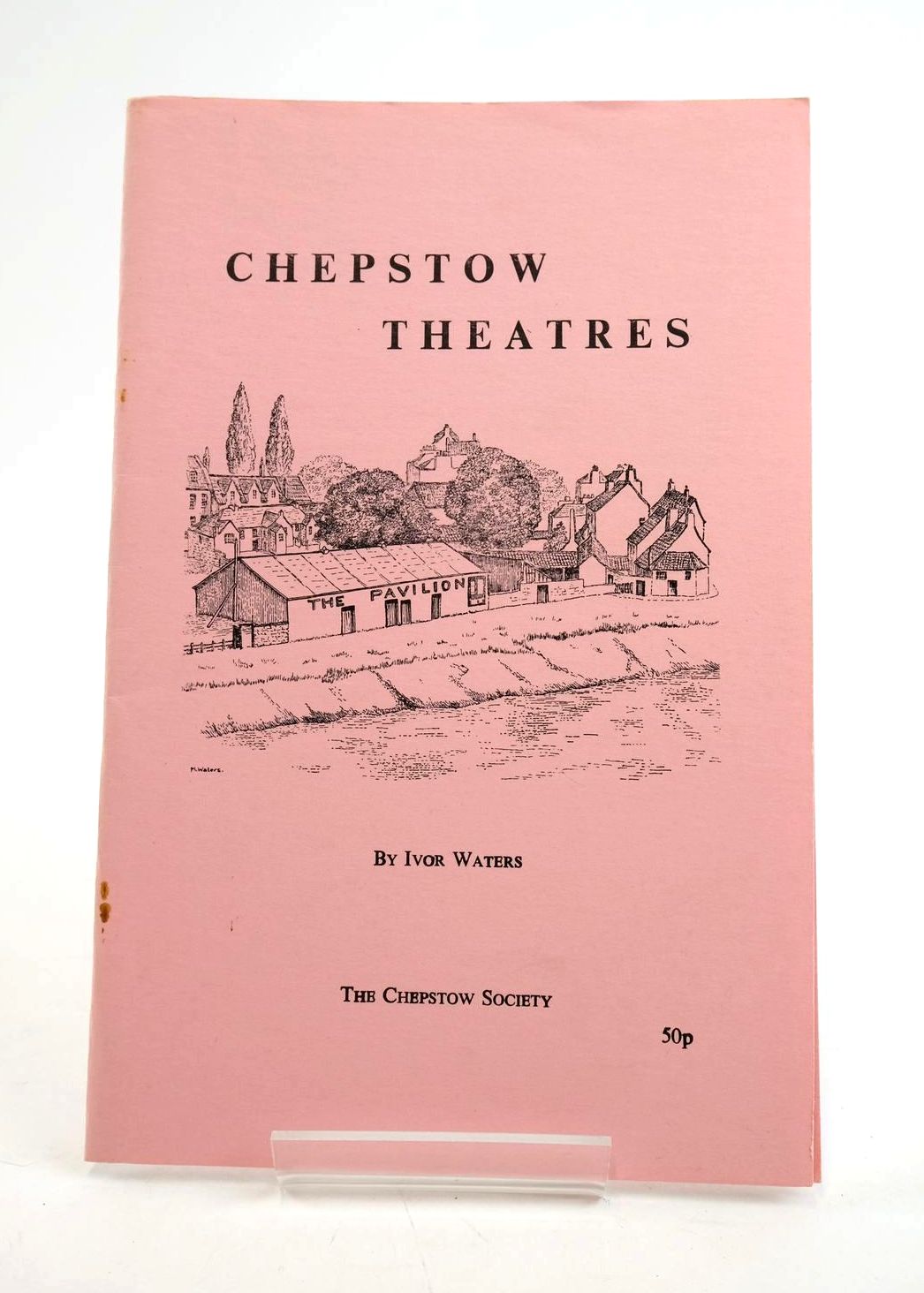 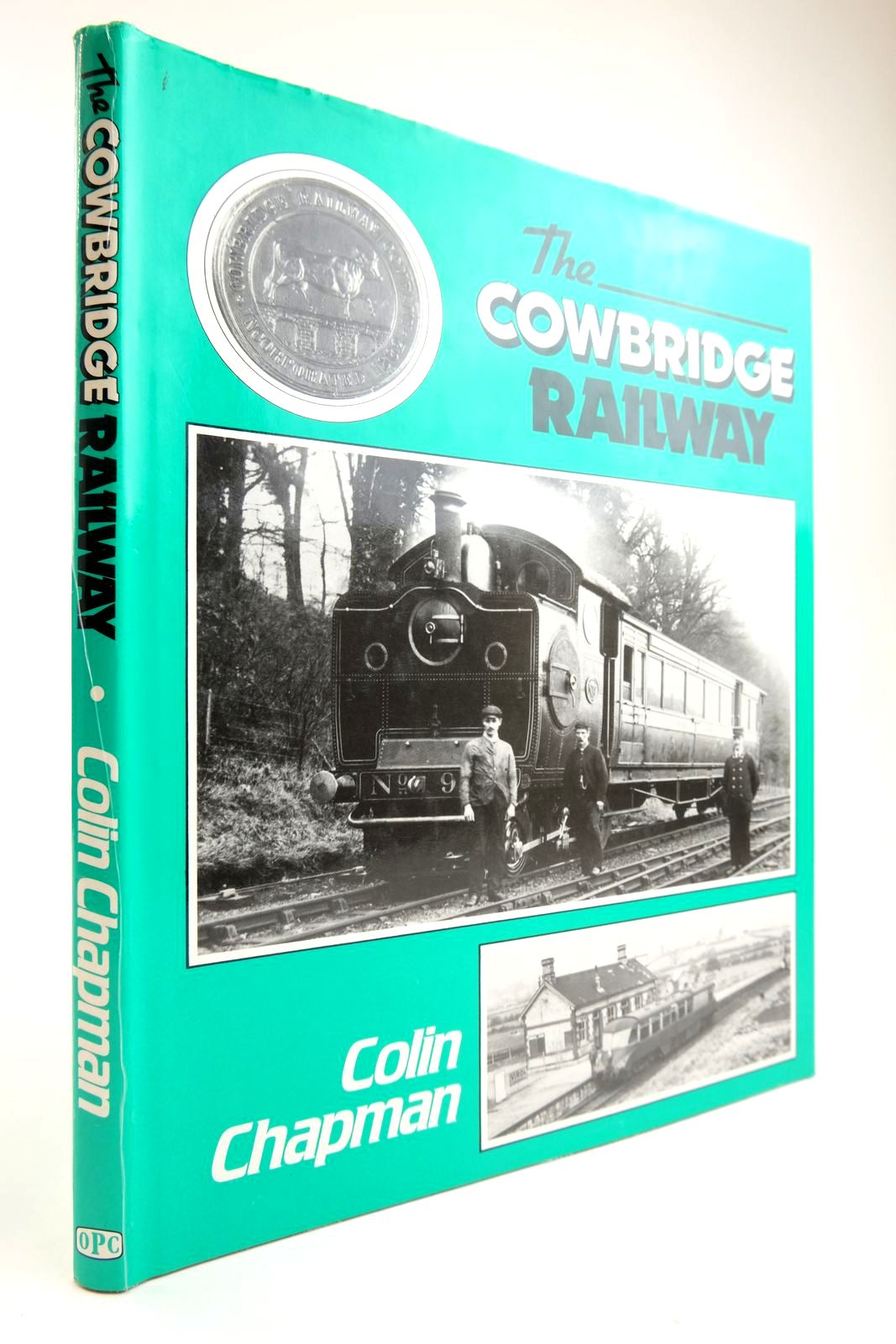 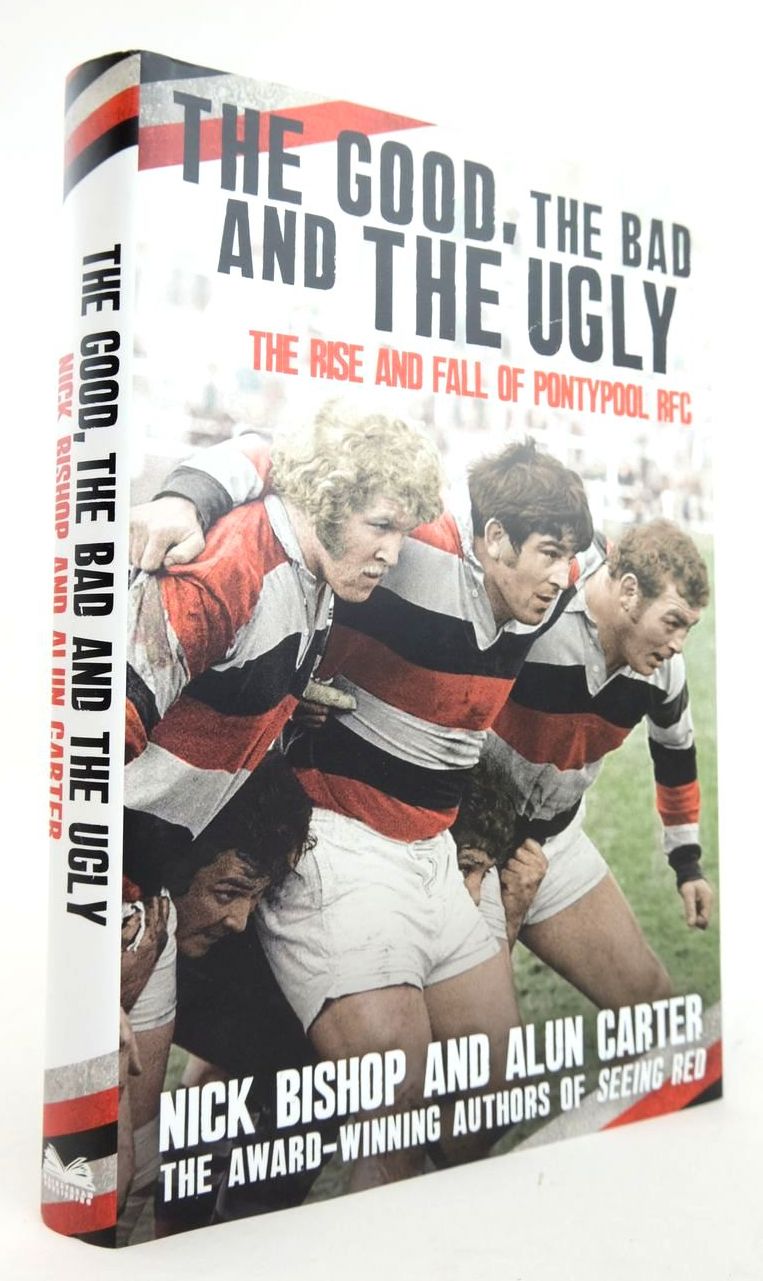 THE GOOD, THE BAD AND THE UGLY: THE RISE AND FALL OF PONTYPOOL RFC
Written by Nick Bishop & Alun Carter. Stock no 1820272. Published by Mainstream Publishing. Circa. 2013. 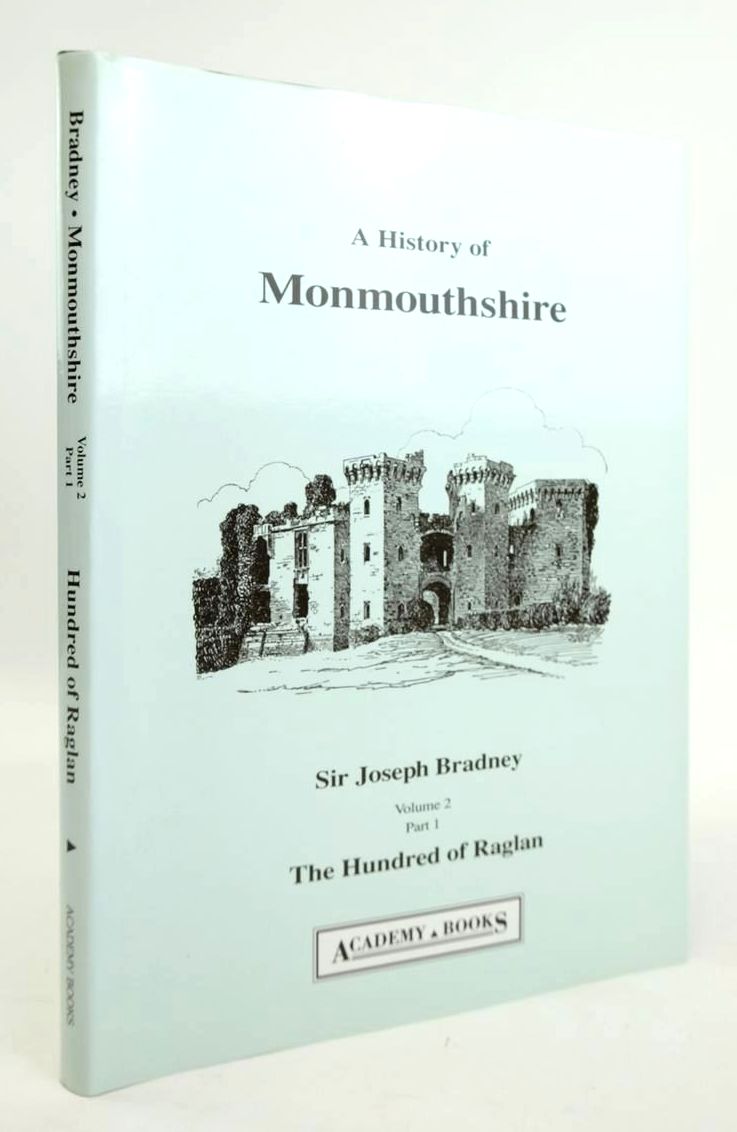 A HISTORY OF MONMOUTHSHIRE: THE HUNDRED OF RAGLAN
Written by Joseph Bradney. Stock no 1820265. Published by Academy Books. 1st thus. 1992. 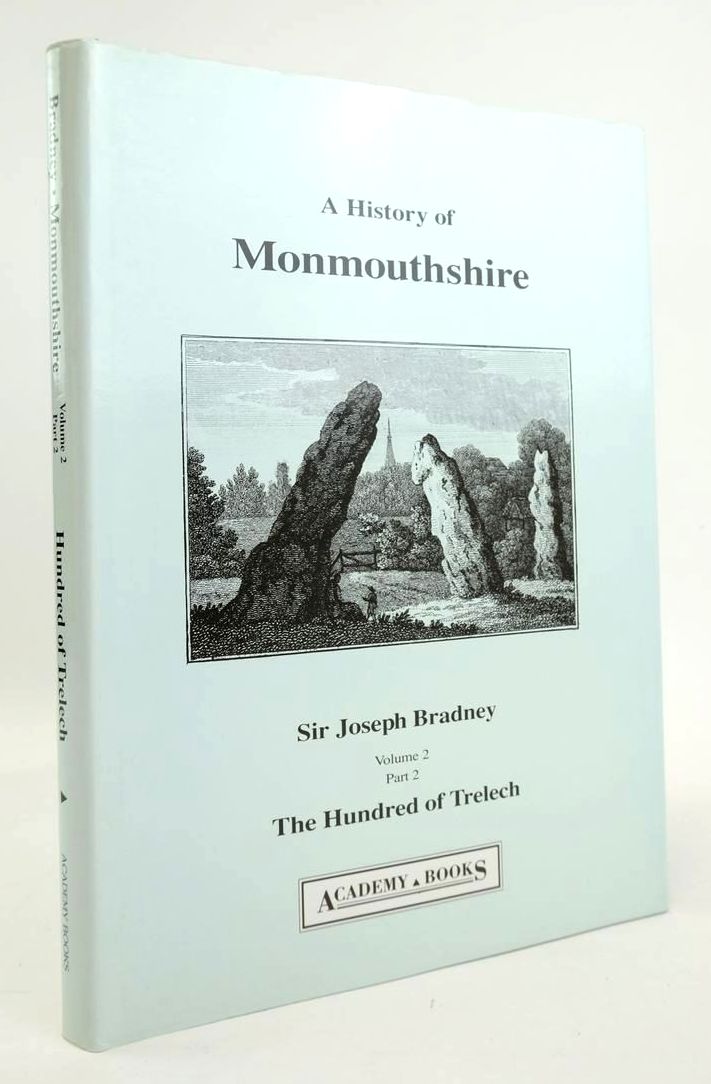 A HISTORY OF MONMOUTHSHIRE: THE HUNDRED OF TRELECH
Written by Joseph Bradney. Stock no 1820264. Published by Academy Books. 1st thus. 1992. 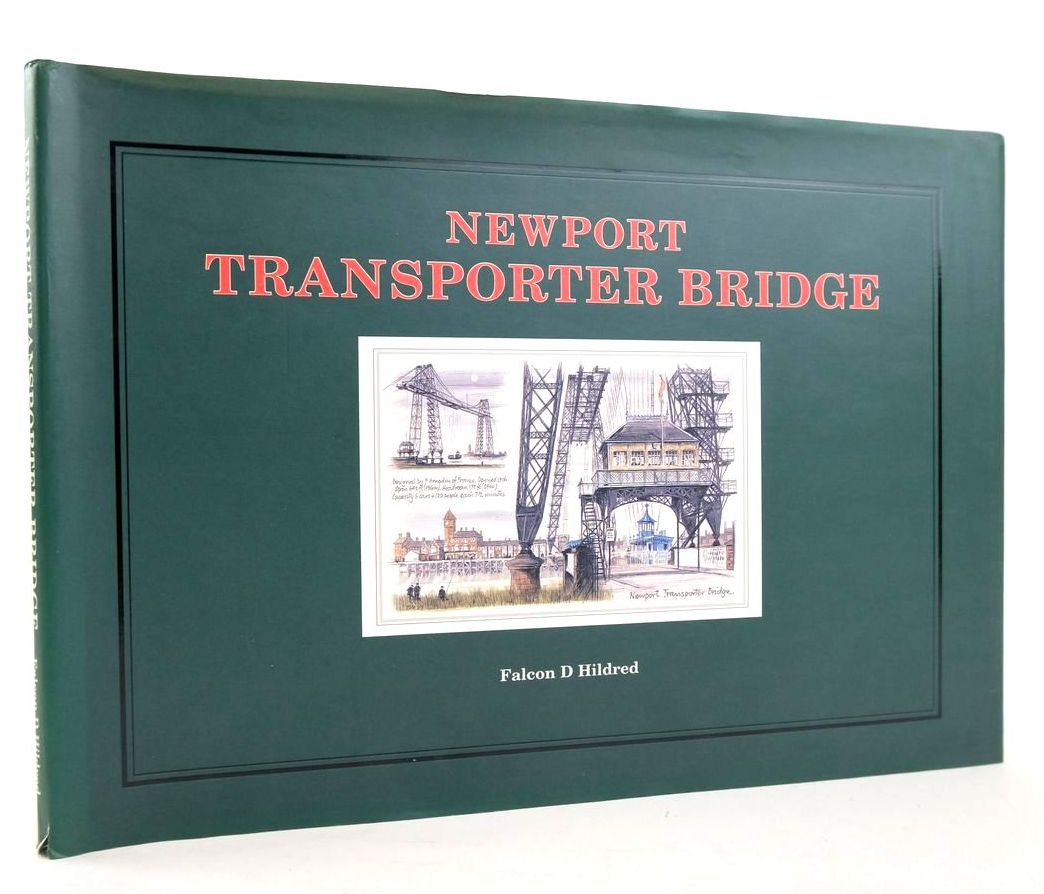