Eileen will inevitably be most famous for her illustrations in Enid Blyton’s Famous Five Series , but there is so much more to be told. At one point she was running three careers in parallel; that of a respected wildlife author, a noted children’s illustrator and a commercial artists for among others The National Association of Mental Health Education and the Central Council for Heath Education. 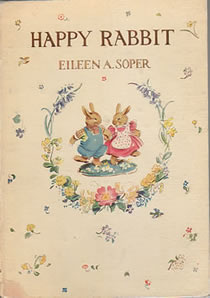 Eileen was born in 1905, the second daughter of George and Ada Soper. When Eileen was three years old the family moved to a new house built by George in the Hertfordshire countryside. This house, christened Wildings by Eileen after her Fathers death in 1942, is where Eileen and her sister Eva spent most of their life. Eileen was a woman of extreme drive, single mindedness and business acumen who chose to isolate herself at Wildings with its large garden.

Eileen’s skill as an illustrator was almost certainly handed down from her father George who was a wonderful versatile illustrator, and whose illustrations hung at the Royal Academy nearly every year after his first exhibition at the age of 19. Eileen’s precocious drawing talent was nurtured by her father from the moment she could first hold a pencil. By the age of fourteen, four of her prints were hung in a gallery in Los Angeles. Two of these were later hung in the Royal Academy in London, which created intense interest and the comment from the jury “that Miss Soper, aged fifteen, can hold her own with giants.” 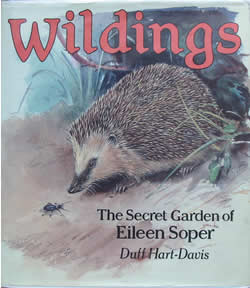 It was not until 1941 that her career as a book illustrator took off when the publishers Macmillan suggested her name to Enid Blyton , firstly for a series of Nature Readers. But it was the commission to illustrate Five on a Treasure Island , presumably made at Blyton’s insistence, that made Soper’s name. She went on to illustrate 35 books for Blyton over 25 years. The two were never to meet and it was reported by Eileen’s friends that she considered the illustrations of Blyton’s books “hack work” and “a chore”. She also complained that the author was a menace, in that she demanded “footling changes in drawings that were already adequate”. 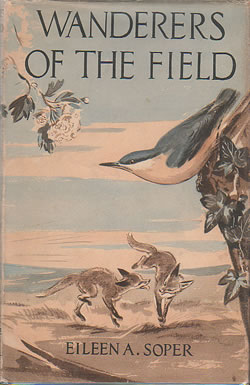 Eileen had always dreamed of writing, and working with Blyton probably spurred her on. Her first book Happy Rabbit was accepted by Macmillan in 1945 and Soper received an advance of £50. Post war shortages delayed its appearance, but the simple tale about a rabbit building a house, getting married and having a family was finally published in 1947. By which time Eileen had already finished her second children’s book called The Rainbow’s Secret, later to be re-titled Dormouse Awake. Her third children’s book Sail Away Shrew was ordered by Queen Mary, but apparently it was not successful enough as her next book Moles and Moonshine was then rejected by five publishers. She struggled to unsuccessfully get her next few children’s books published and so decided to turn to another medium – poetry. This again was turned down by many publishers and she managed to get just one poetry book published – Songs on the Wind published in 1948 by the Museum Press.

After her father’s death in 1942 Eileen retreated to her garden at Wildings and encouraged the birds to feed from her hand, but it was the thrill of seeing her first badger in 1951 which was again going to change the course of her life. By the winter of 1953 she had made enough notes and sketches for a book about badgers . The title changed several times as she tried to get it published but finally after suggestions from Colin Franklin, a director at Routledge & Kegan, changes were made and the book was finally published under the title When Badgers Wake. It was dedicated to the badgers and contained 150 of Soper’s sketches, which are stunning even in black and white. The work was well received and even made it into Sir Basil Blackwell’s 50 Beautiful Books Of The Year for 1955. 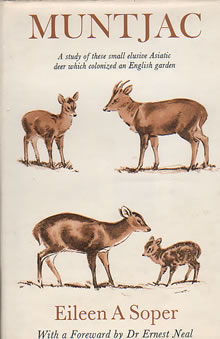 In February 1963 Eileen made her only appearance on television with a slot on the BBC’s Animal Magic series. This appearance attracted a lot of fan mail and resulted in the publication of three illustrated pamphlets under the title The Eileen Soper Wildlife Series. The books were all adapted from Wanderers of the Field which was first published in 1959.

Soper had seven wildlife books published in all, including Muntjacwhich took 8 years to prepare after the first appearance of muntjac deer in her garden. Eileen managed to train the shy creatures to come to the sound of her voice. Muntjac was her last book which was published in 1969, although she did carry on illustrating books for another 10 years, even working when she had a broken arm. She finally died in 1990. It was not until her death that the full extent of the work of her and her father was discovered. Pictures by the Sopers lined all the walls in Wildings and were stacked haphazardly everywhere, with over 4,000 works by George Soper alone, all unseen by an outsider since 1942.

This Article was sourced from Book and Magazine Collector, October 1995 and Wildings – The Secret Garden Of Eileen Soper by Duff Hart-Davis