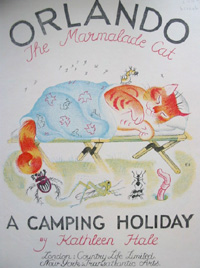 Following her marriage in 1926 and the subsequent birth of her children,Kathleen Hale began to invent stories to relate to the children which were all about her marmalade cat, Orlando. In 1938 her first book of Orlando's adventures, Orlando the Marmalade Cat - A Camping Holiday, was published by Country Life and it became an immediate success. The story introduces the reader to Orlando and also to his family, wife Grace and the kittens Blanche, Pansy & Tinkle and is loosely based around Kathleen Hale's own family camping trips to Norfolk. 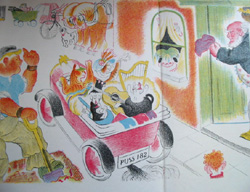 When Orlando approaches his 'Master' with a request to take the family on a camping trip his 'Master' is concerned. If he grants the holiday to Orlando and his family, the mice will have a field day but, despite his reluctance, he agrees to let them go. Orlando, Grace and the kittens happily pack up the car and head out for their first ever 'real' holiday.

The wonderful lithographed illustrations throughout the book draw the reader into the journey taken by Orlando and his family in their search for the perfect spot to pitch their tent. They find one ideally sited, near a stream for fish and a farm for fresh milk and the kittens waste no time in going off to explore. Countless lessons are learned as the kittens get up to mischief - like falling in the stream and chasing a rainbow, only to discover that they will never catch it!

At night, full of the excitement of the day's adventures, the kittens struggle to sleep and a beautiful image of Grace serenading them with a lullaby whilst Orlando beats time with his tail is portrayed in both words and pictures (image below right) The vision of various bugs being 'alarmed' by the eventual purrs of contentment from the sleeping cats are utterly charming. 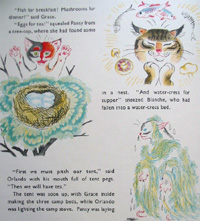 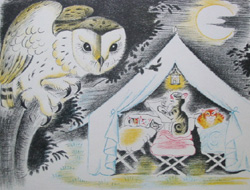 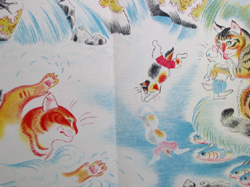 Breakfast the following morning consists of milk still warm from the cow and fish freshly caught in the nearby stream by Orlando and Tinkle and cooked over the camp fire by Grace. With the washing-up completed the family set off for a walk, carrying a picnic lunch in their rucksack. They stop on the way next to a mountain stream, don their bathing pants and dive in - (dispelling the myth that cats can't swim - They can - they just don't like to get wet!). Tinkle, one of the kittens, is afraid of the water and climbs on Orlando's back and pretends to be a 'cat-fish' but is soon joining his siblings in the water (image below left).

Again the illustrations bring to mind the fun being had and each tells a story; the kittens investigating the varied pond life whilst swimming in the stream, playing with hairy caterpillars found later on their walk, having the kind of adventure any youngster may enjoy.

The fear and hiding from the barking sheepdog who, luckily mistaking their visible tails for more hairy caterpillars, returns to tending his sheep, to the eventual arrival at the summit of the mountain where they lay down to rest are worded and illustrated in such a way that the reader is drawn into the journey with the cats.

On Day Two of the Camping Holiday we are taken on a trip to the village with Orlando and the kittens so they can post cards to their friends and in the afternoon, all through the magic of picture and prose, we enjoy the cats as they undertake various hobbies and round off the evening with a 'sing-song' around the camp-fire. 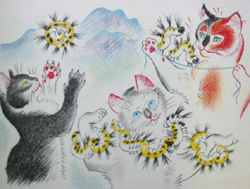 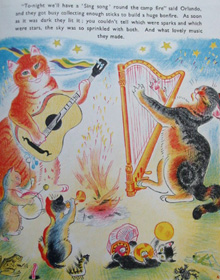 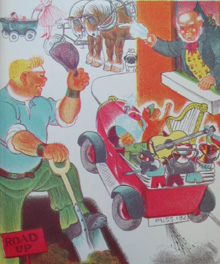 The Author, having led us so beautifully and clearly through these first two days for Orlando and his family leaves us with a few lines with which to indulge yet further our now alert imagination with visions of the family undertaking other adventures and brings the story to a conclusion with the return to home and the task of chasing away all the impudent little mice.

This story was the start of a series of 18 books of Orlando 's adventures with the final one, Orlando The Marmalade Cat and the Water Cats, being published in 1972. In 1959 a revised edition of A Camping Holiday was lithographed by the author and published by John Murray. In 1990 the books were reissued by Frederick Warne and at this time the author took the opportunity to correct any minor imperfections she noticed in the artwork or text. It is most interesting to compare the original publications with the reissues and note the many differences in the use of colour and words, and the placement and appearance of the characters in the illustrations - the furthest two pictures to the right above show the 1990 revised edition and the the original edition respectively.

Some 65 years later author Kathleen Hale still manages to hold captive the reader, both young and old, with these beautifully written and illustrated stories many of which we have in stock. 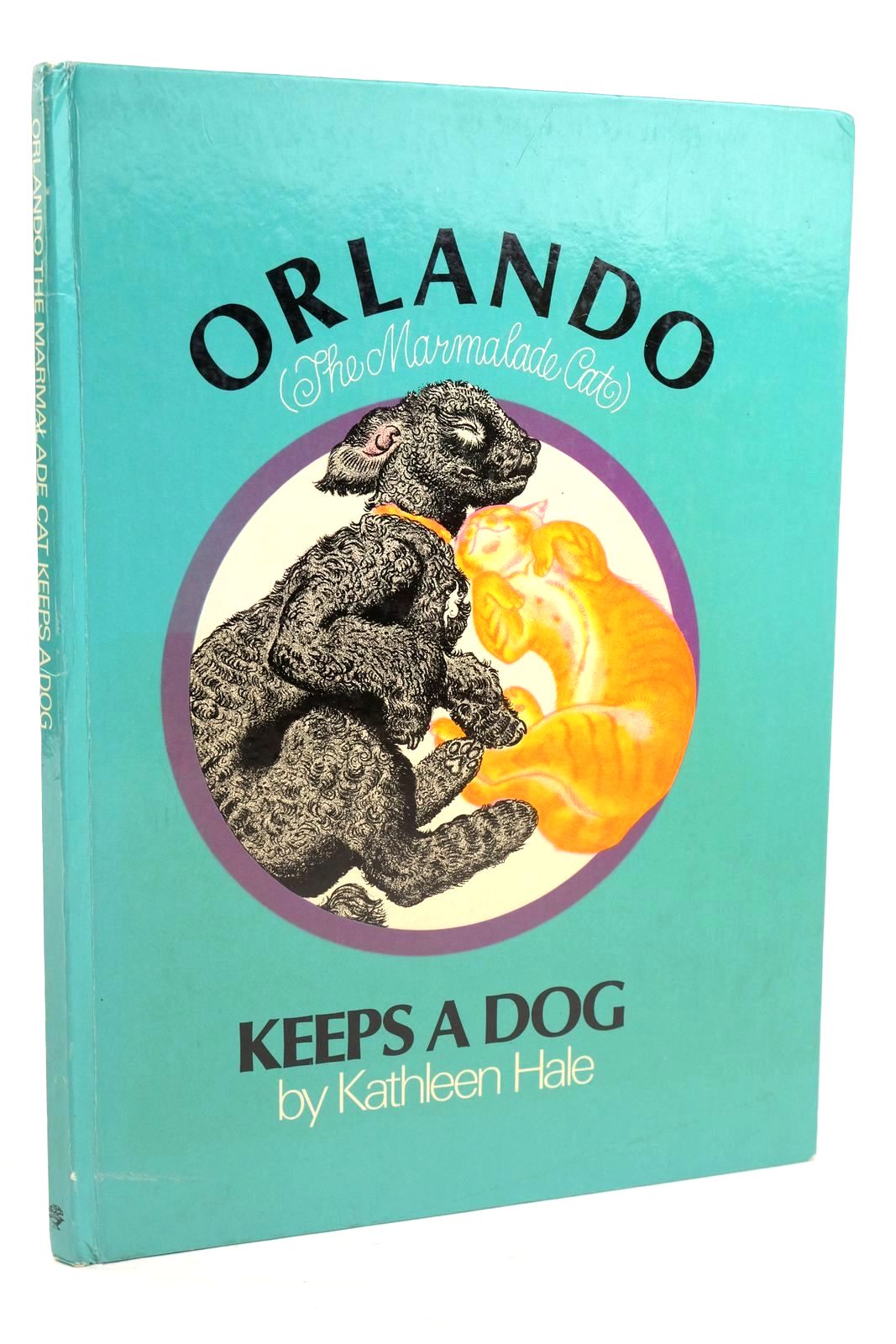 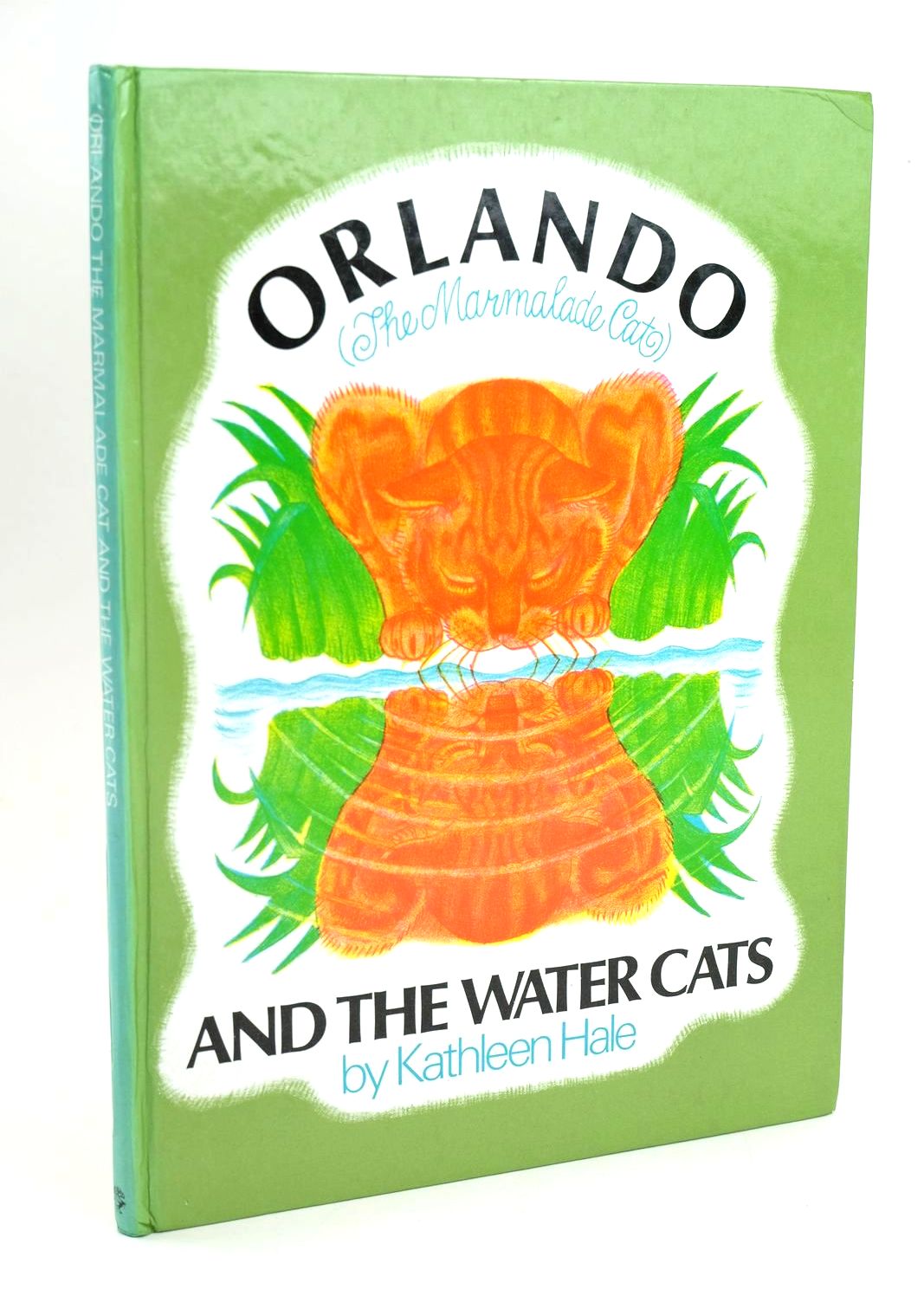 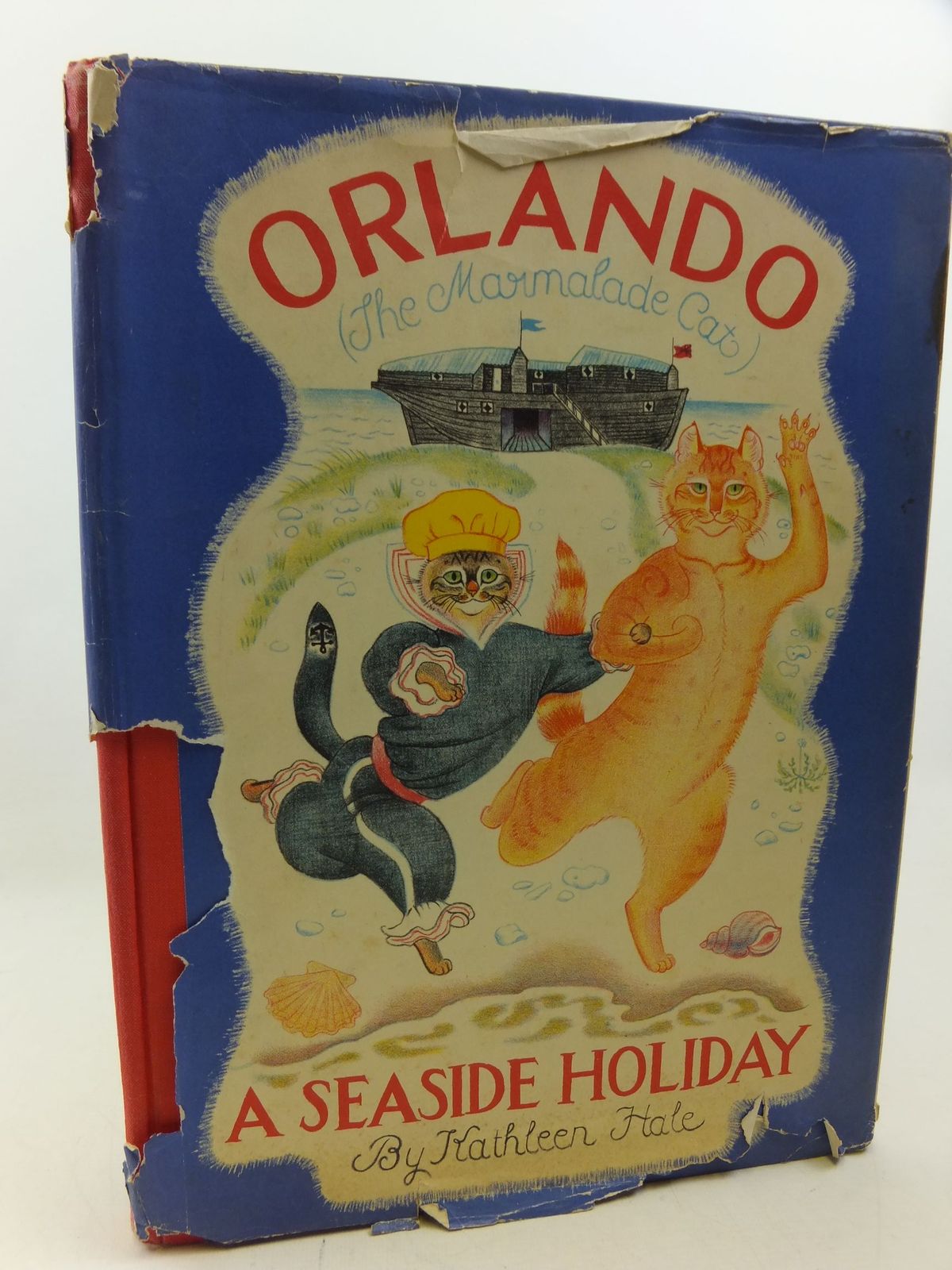 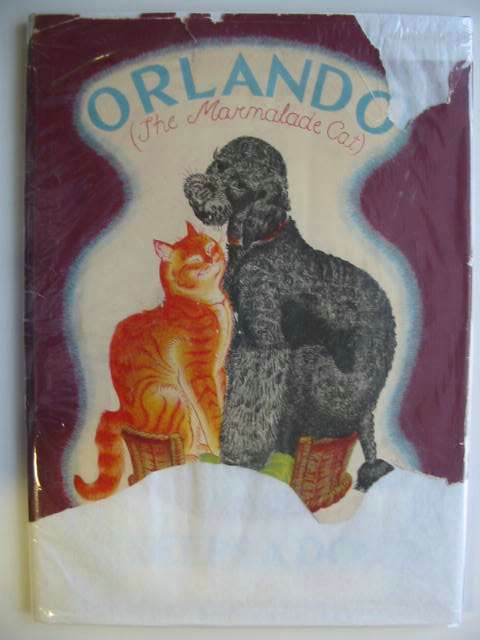