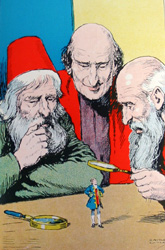 "My name is Gulliver, Lemuel Gulliver. I was born in Nottinghamshire and was sent to Cambridge University when I was fourteen years old. Three years later I began training as a surgeon, first in London and afterwards in Leyden in the Netherlands. I made several voyages as a ship's surgeon, but grew tired of the sea and decided to set up as a doctor in Wapping, where I moved with my wife and children. However, business did not go well and I again took a post as a ship's surgeon." 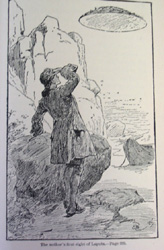 So starts (a slightly abridged version of) the most intriguing and imaginative travel book that you will ever set eyes on! What travel book do you know that describes extraordinary voyages into lands so diverse that you can be a giant in one and a midget in the next? The book Gulliver's Travels by Jonathan Swift, orTravels into Several Remote Nations of the World by Lemuel Gulliver as it was originally titled when published in 1726, is possibly the most readable of all the eighteenth-century prose classics.

Above: Illustration by Gordon Browne

The book is made up of four separate adventures into different lands.

In the first, Gulliver boards a boat named the Antelope on 4 May 1699, but is later shipwrecked and washed up onto the shores of the land of the miniature Lilliputians. Here he is initially taken captive, but treated well after showing mercy to some ruffians who attacked him with arrows! All is not well in the land of Lilliput. There are two opposing groups at court, the Tramecksan and the Slamecksan, and they are distinguished by the style of shoe they wear. Lilliput is also at war with its neighbouring country, Blefuscu, regarding a dispute over eggs! Throughout the adventure, Gulliver saves the Lilliputians from an imminent invasion by commandeering the fleet of Blefuscu (easily done when you're a giant), and also saves the Emperor's wife from a palace fire by relieving himself over the flames! Due to court politics however, Gulliver falls out of favour and eventually flees to Blefuscu where he manages to find a suitable boat and returns to England, but not before he has given the reader a wonderfully detailed description of the Lilliputians. 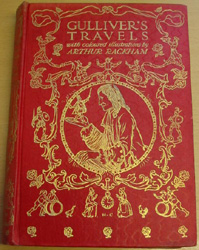 On 20 June 1702, Gulliver embarks on another voyage, care of a ship named the Adventure, bound for Surat. So starts his second exploit. This time, Gulliver finds himself alone on an island full of giants, who turn out to be quite friendly and enlightened. A kindly farmer and his family care for Gulliver, except for the baby who tries to suck on Gulliver's head! Unfortunately the farmer's greed gets the better of him and he forces Gulliver into performing for money. Eventually, Gulliver is invited to stay at court where he entertains the King and Queen with stories of England while also dodging the rather mean attacks of a dwarf - his size leads him to have several close shaves with rats and wasps to mention just a few. The country is called Brobdingnag and the tale is interesting as it contains much narrative between Gulliver and the king regarding the political affairs of England, leading the King to the conclusion that Gulliver has come from a terribly corrupt and rotten country! Finally, Gulliver is carried off by an eagle that later drops him in the sea, where he is rescued and again makes his way back to England.

Left: Attractive binding of a copy illustrated by Arthur Rackham.

The third journey starts on 5 August 1706 with Gulliver boarding the Hopewell, bound for the East Indies. However, the ship is taken over by pirates and Gulliver is cast adrift in a small canoe and later rescued by the occupants of a huge floating island called Laputa. The people of the island are always so preoccupied by thinking important thoughts that they have to be hit on the head by attendants with inflated bladders for them to speak or listen to anyone else! The people are described well by Gulliver but come across as rather ridiculous with a fascination for mathematics and music but a lack of any skill in applying the subjects. The king maintains control of his kingdom by simply making his island hover over any town that rebels and depriving them of rain and sun. If this doesn't work he lowers the island onto the town and squashes it! Gulliver also had mini adventures in several of the surrounding islands, including meeting ghosts and immortals, before finally boarding a ship for home again.

Gulliver's fourth and final adventure starts with him being made captain of the Adventure, and setting sail on 7 September 1710. His crew later mutiny and take over the ship abandoning him to the nearest island. Here Gulliver meets half-human, half-savage creatures called Yahoos, who share the island with a group of super intelligent horses called Houyhnhnms. Gulliver befriends the Houyhnhnms and much of the tale is made up of the discussions Gulliver has with his master regarding his life back in England. His master, a Houyhnhnm, comes to the conclusion that the Yahoos in Gulliver's home country are even worse than the half-savage ones that the Houyhnhnms put up with. Indeed, by the end of the account, Gulliver himself begins to despise his own race, viewing his master's race as a far more educated and fair society. When asked to leave the island, he avoids returning to England due to his loathing of Yahoos. However, he finally makes it home and the adventure concludes with Gulliver fainting from horror when his wife (a Yahoo) kisses him! 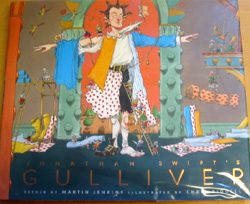 The book Gulliver's Travels is an extremely detailed and intriguing account of a gentleman's travelling experiences and the above description is only a brief synopsis. There is so much more to the book - it really is a super read. However, it has to be said, Gulliver's Travelsis first and foremost a satire, both of the political turmoil of the author's day and the eternal failings of mankind in general. It takes an appreciation of this fact for the reader to get the full potential of this work, although the imagination, variety and simplicity of the language in the book still make it a fabulous book for children. In fact, Swift was determined that all folk, educated and uneducated, would be able to appreciate the book. During his writing of the tale he frequently read out passages to his servant, rigorously rewriting any parts that the man could not understand. The result? A literary work that young or old, scholar or layman could enjoy. Impressive!

Unfortunately, the author, Jonathan Swift, did not have a lot of other literary success. He was a prolific writer but most of his work did not stand the test of time. We are fortunate to have two copies of A Tale of a Tub by Swift in stock at the time of writing. Swift was born and educated in Ireland , but had English parents. He was ordained at the age of 28 but remained a tireless campaigner for the rights of Irish people throughout his career. He was 54 years old when he began to write Gulliver's Travels.

The book was originally published in 1726 by Benjamin Motte, but a revised edition was later published by the Dublin printer George Faulkner, in 1735, under the close scrutiny of the author. This revised edition is now the accepted text of the novel. The book has been beautifully illustrated by a number of influential artists including Arthur Rackham,John Hassall, Willy Pogany, and Rex Whistler. In modern times the book has been illustrated rather vibrantly byChris Riddell amongst others. The seemingly endless adaptations and editions of Gulliver's Travels surely only confirm its brilliance and longevity as one of our nation's great classics. So if you have not yet read this masterpiece, why not give it a try? 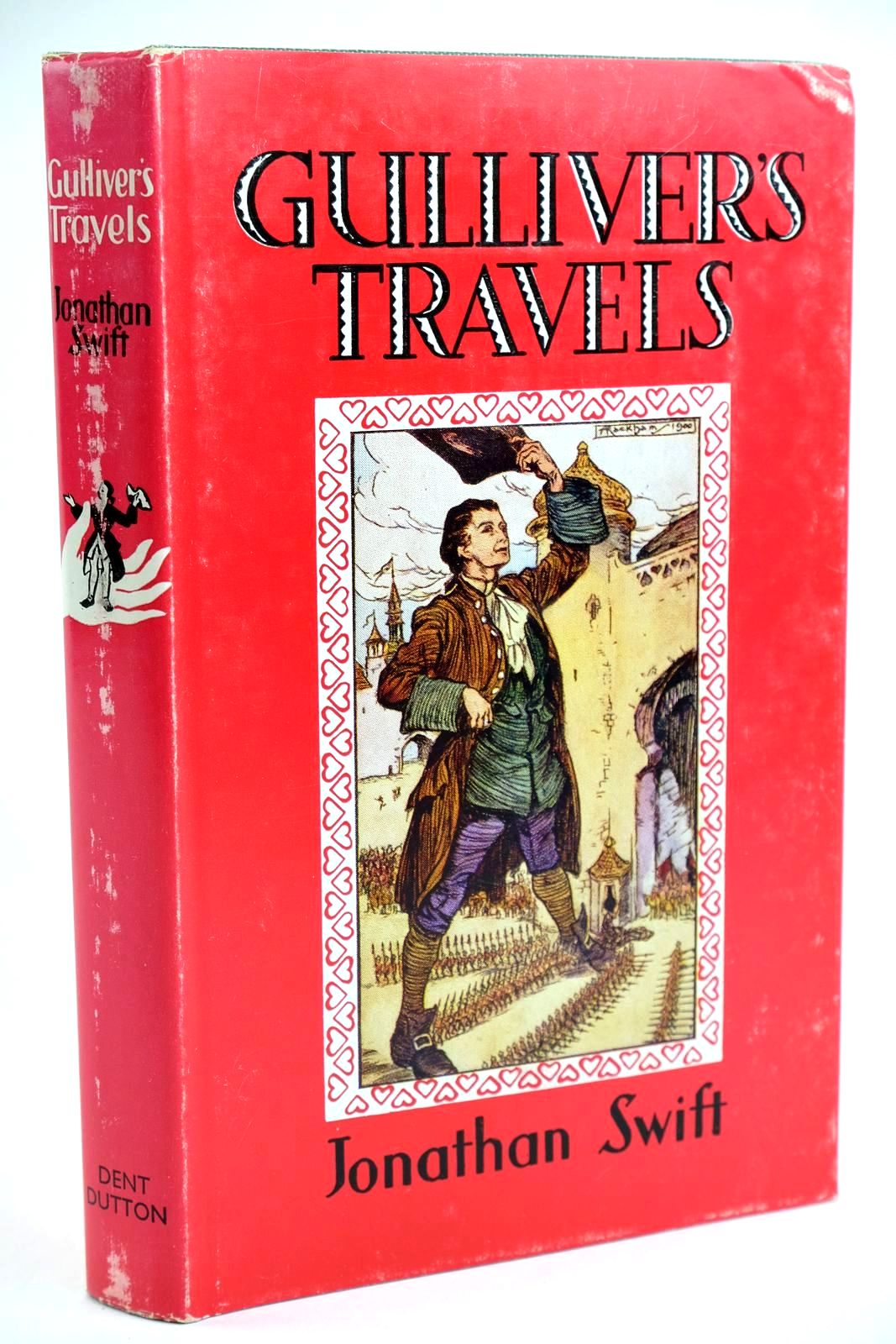 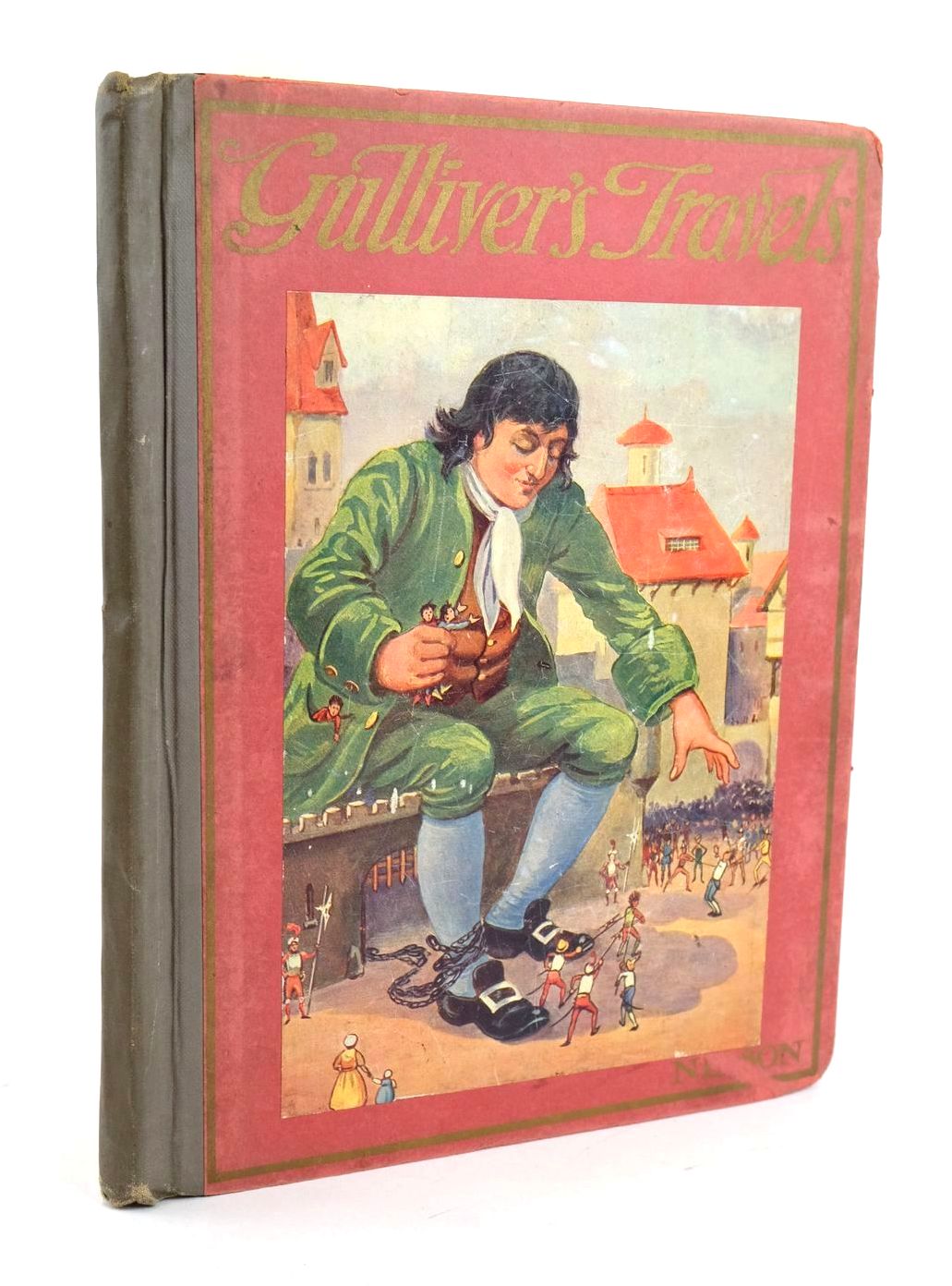 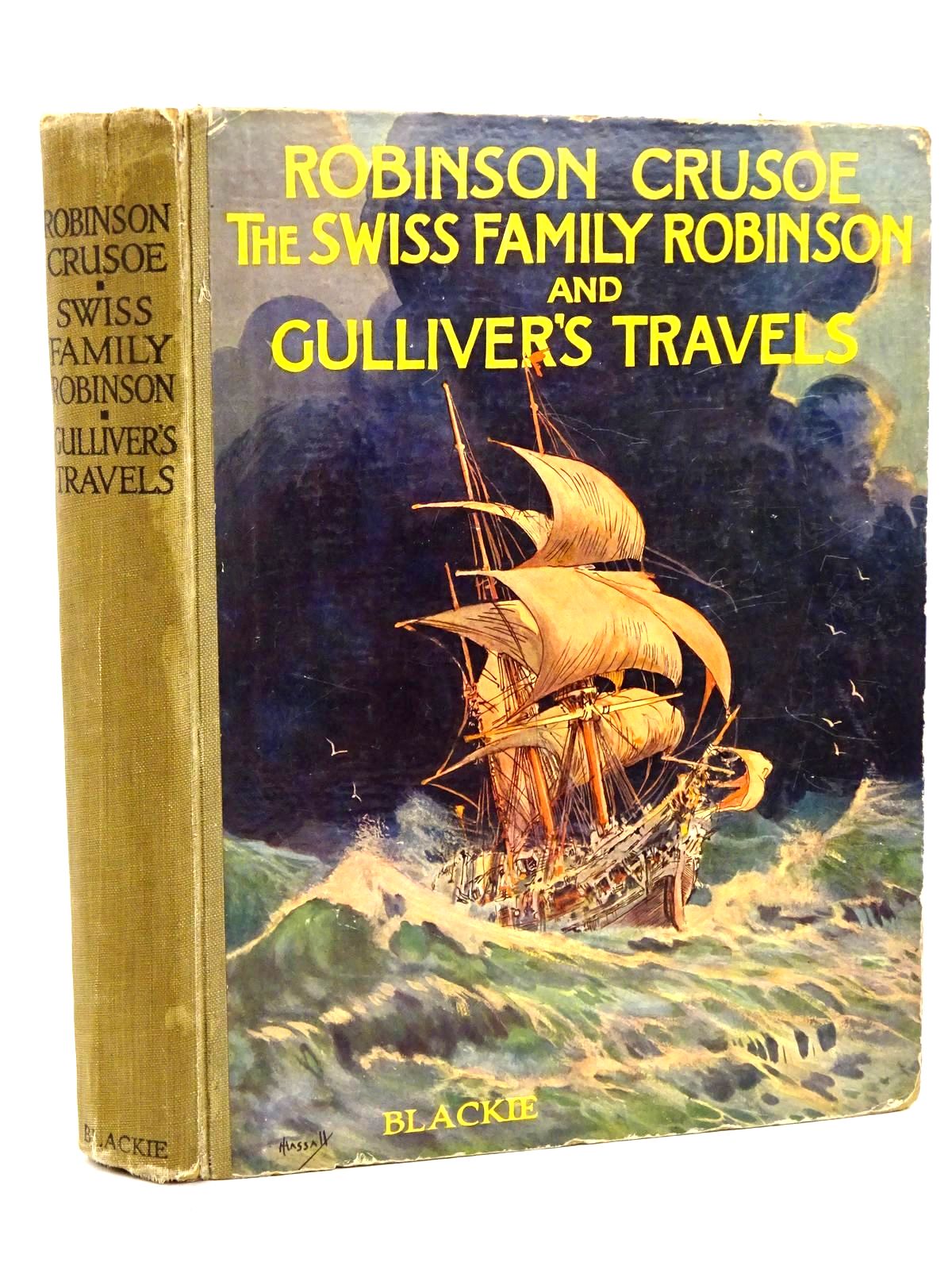 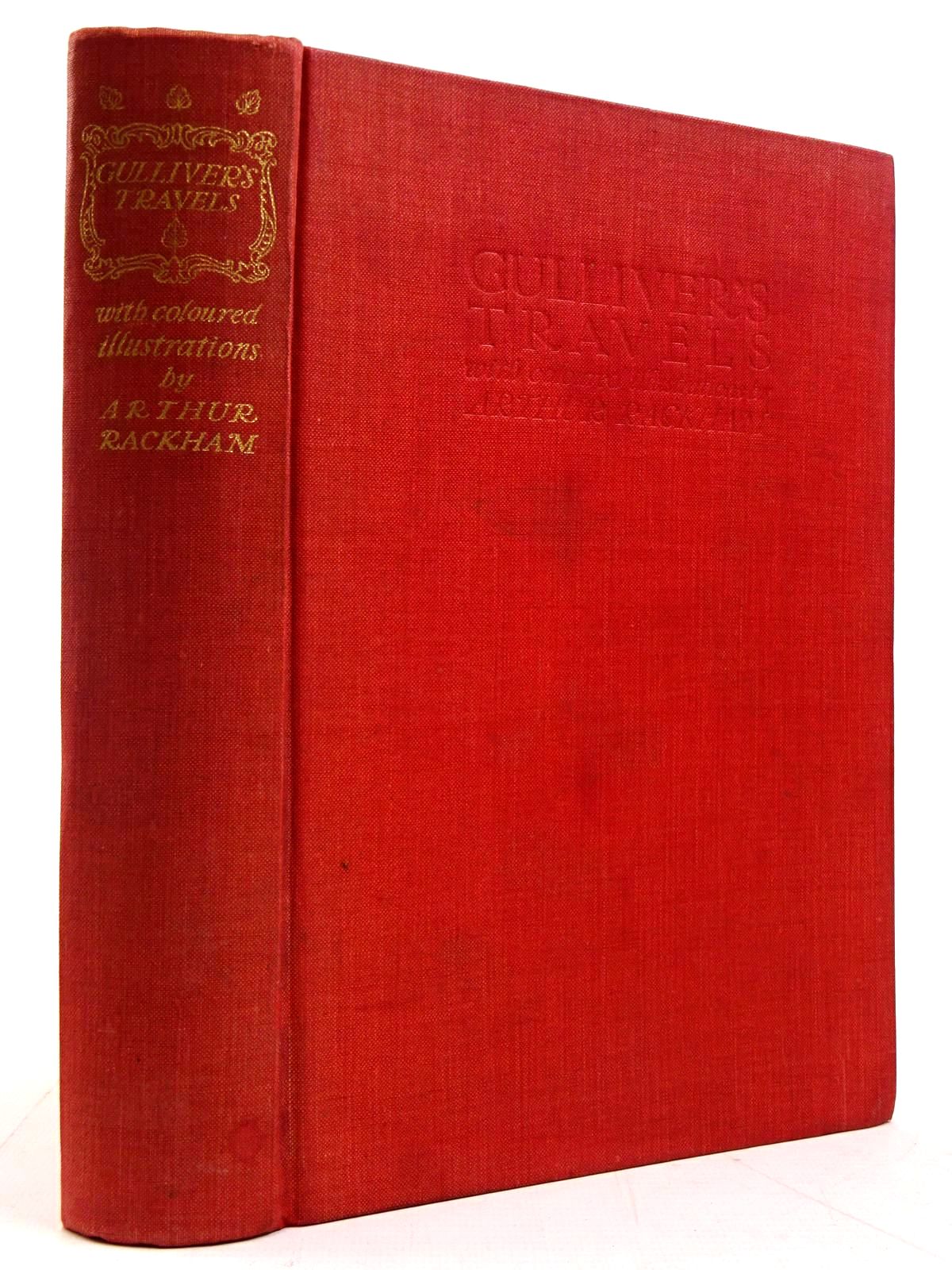 GULLIVER'S TRAVELS INTO SEVERAL REMOTE NATIONS OF THE WORLD
Written by Jonathan Swift. Illustrated by Arthur Rackham. Stock no 2131204. Published by The Temple Press. 1st thus. 1937. 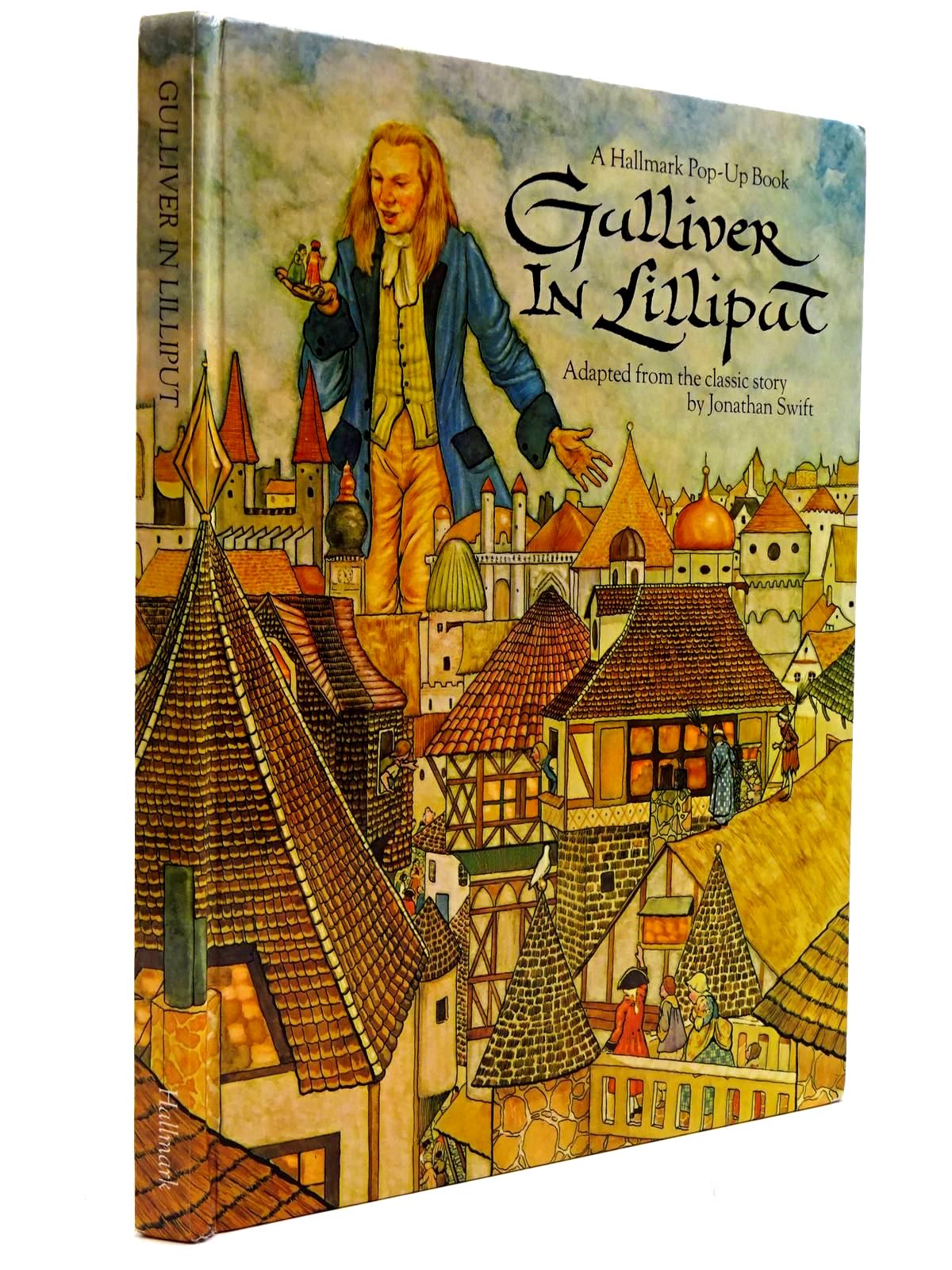 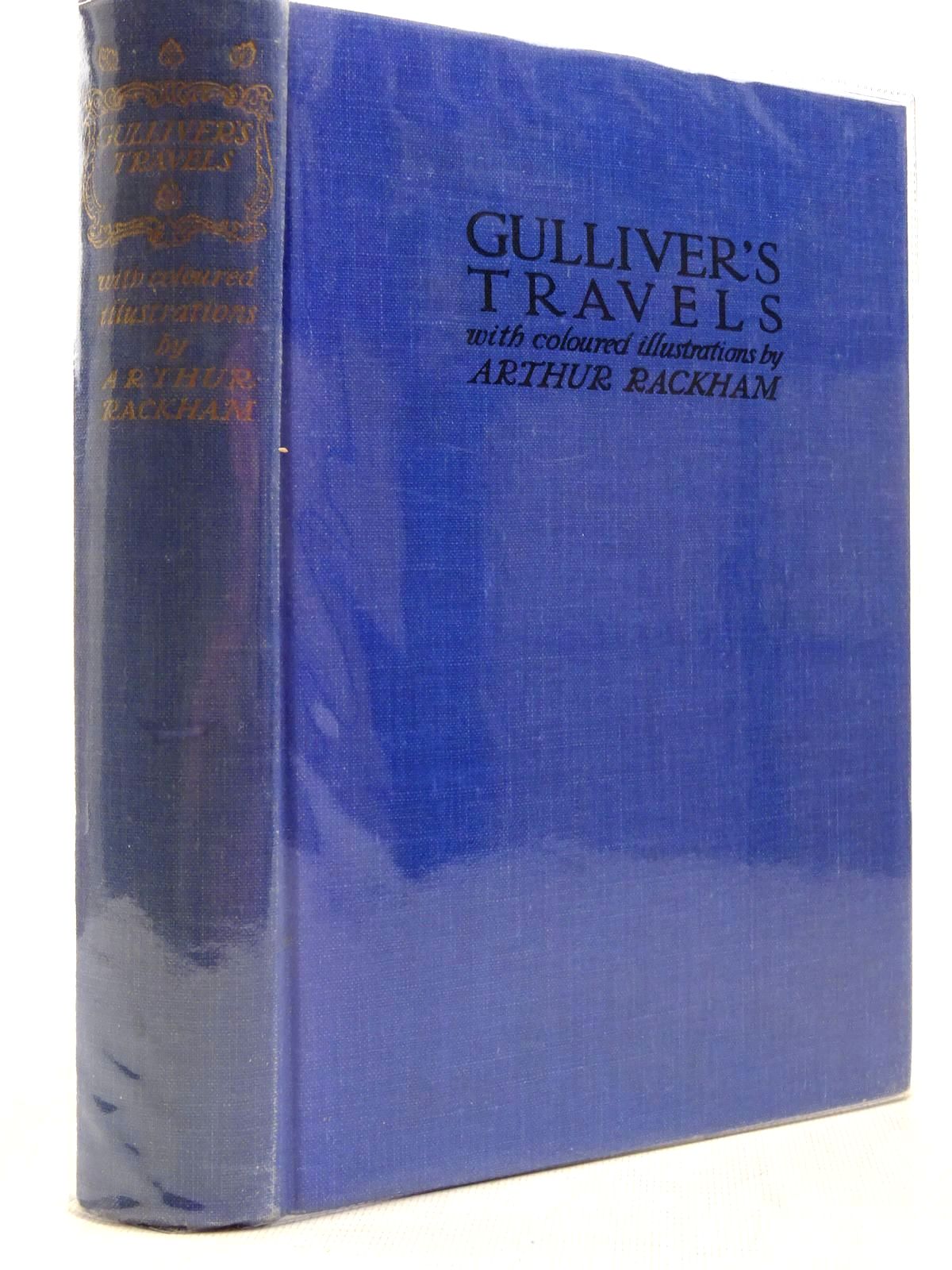 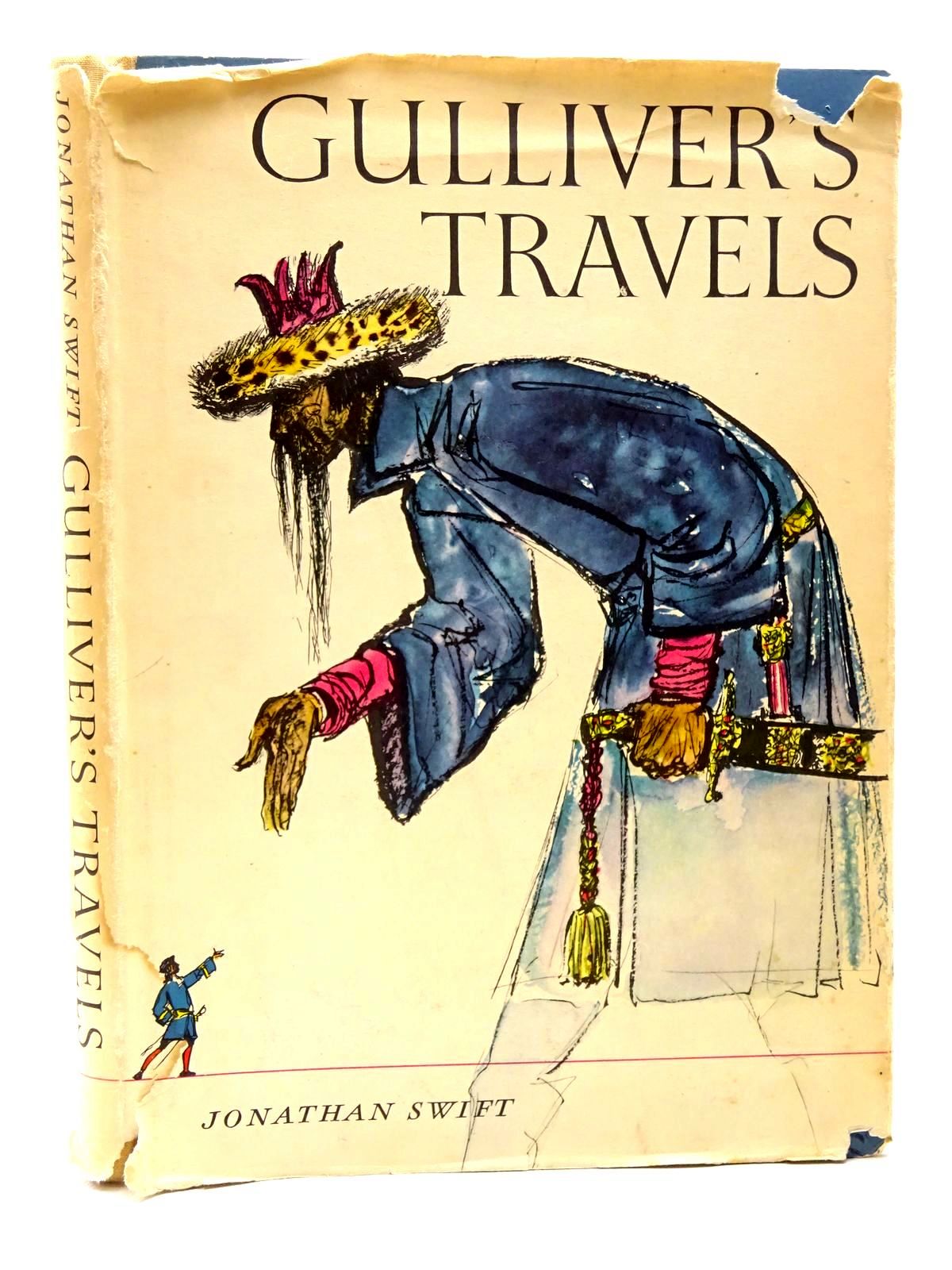 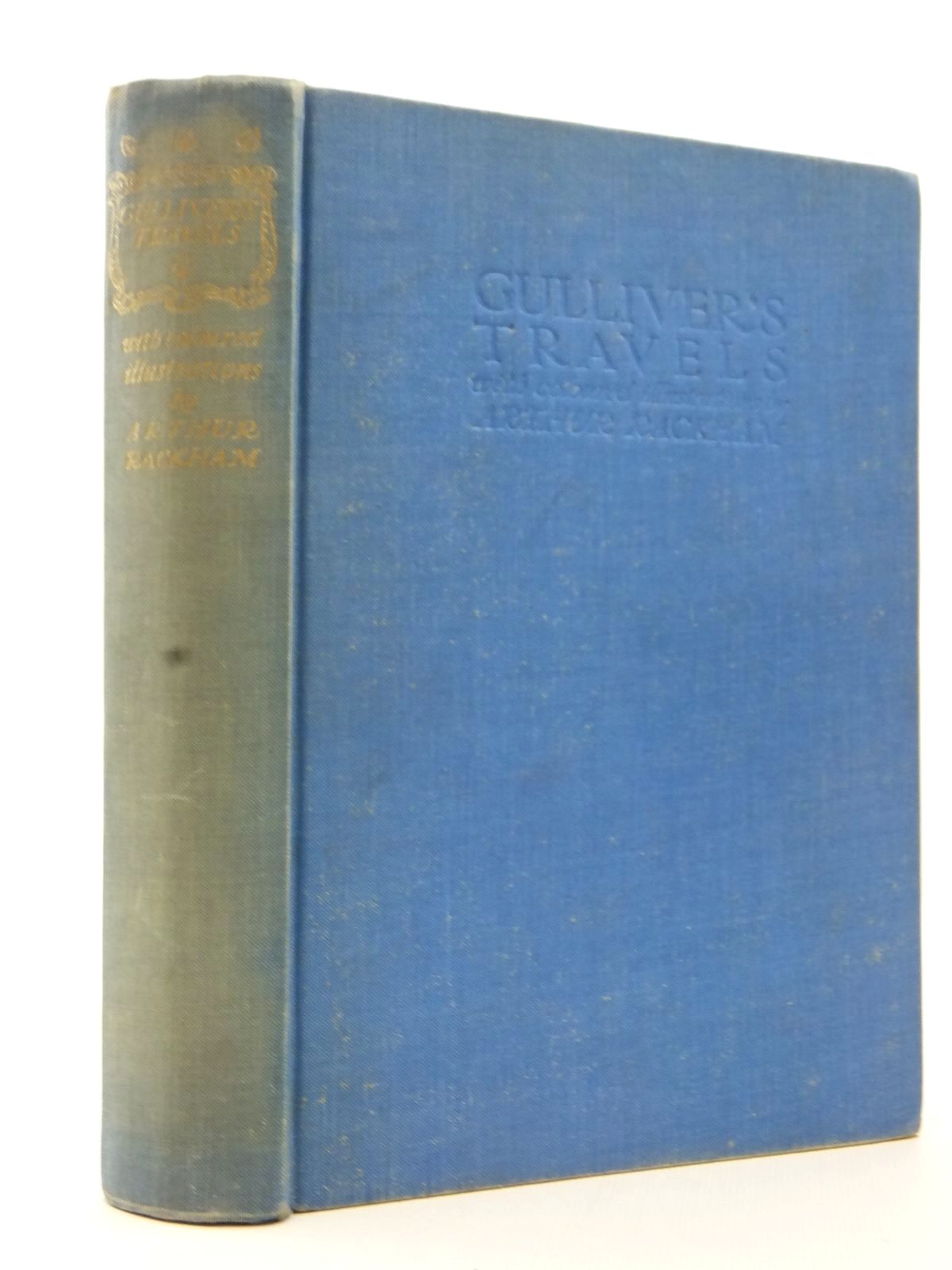 GULLIVER'S TRAVELS INTO SEVERAL REMOTE NATIONS OF THE WORLD
Written by Jonathan Swift. Illustrated by Arthur Rackham. Stock no 1317192. Published by The Temple Press. 1st thus. 1937. 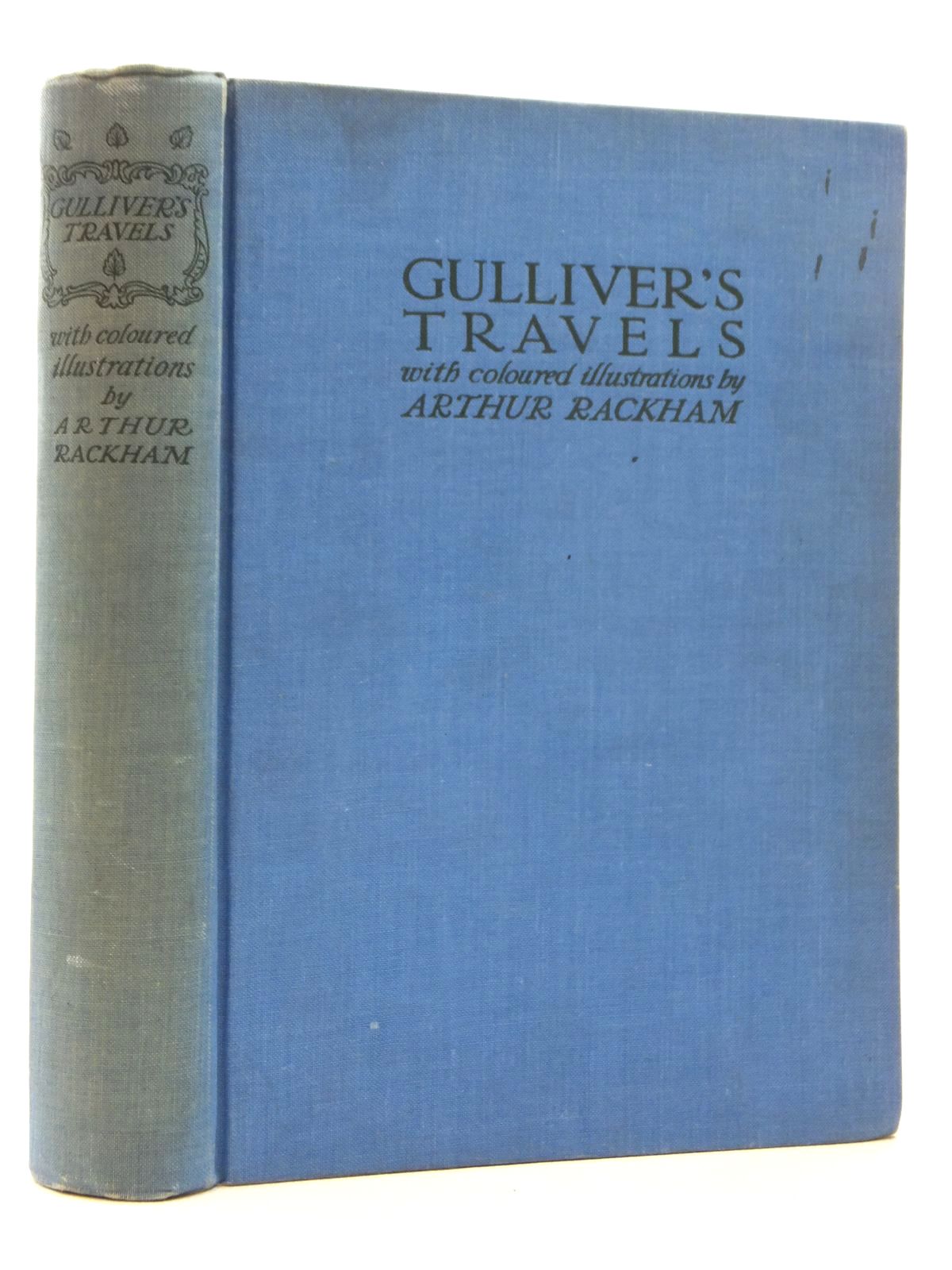 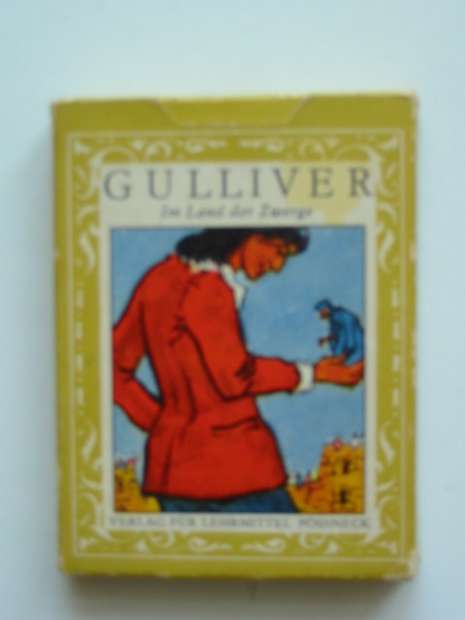