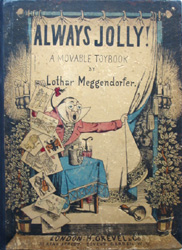 Lothar Meggendorfer was born in Germany in 1847. After completing his technical art studies he became a popular magazine illustrator. He spent many years on the staff of the German satirical magazine 'Fliegende Blatter' and also worked for Munchener Bilderbogen. 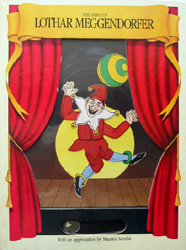 Meggendorfer's popularity today is based solely on his ingenious mechanical picture books for children which he began creating in the late 1880s. Many of his German titles were published in multiple editions. Many were also translated into English, French, Spanish, Italian, Bohemian, Hungarian, and Russian. He is considered the creator and chief innovator of moveable toy books - and deservedly so. His books are much sought after and demand a high price on the rare occasion when they turn up on the market in good working order.

Although the original editions are exceptionally scarce, it is relatively easy to obtain a modern reproduction or facsimile of a Meggendorfer book. Titles which have been reproduced include 'Lothar Meggendorfer's International Circus' (a pop-up book), 'TheCity Park' (a stand-up book), and 'The Doll's House' (a pop-up book).

'The Genius of Lothar Meggendorfer' contains reproductions from Meggendorfer editions published before 1900. The last moving model in this book has a clear backing on the reverse of the page so that one is able to view the moving parts when the tab is pulled - I can assure you, it is a very complex mechanism! 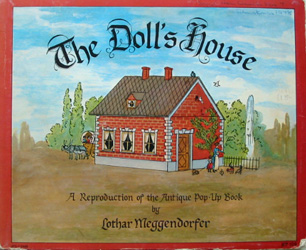 'Always Jolly' is an example of the many early Meggendorfer titles which are true moveable books operated by pull-tabs. Intricate levers are hidden between the pages to give movement. Tiny metal rivets which are tight curls of thin copper wire are used to attach the levers so that a single pull-tab can activate all the levers, even giving a delay to some moving parts as the tab is pulled further out. The book is larger than a 'normal' book in size, being 13 inches from top to bottom and 9.5 inches across. It contains 8 full page moveable images accompanied by a verse on the facing page.These include: The Angler, The Naturalist, The Forgotten Latchkey, The Lion, The Elephant, The Portrait-Painter, The Musician & The Pianist. 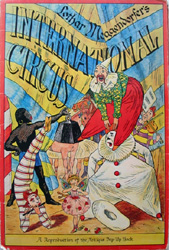 In 'Always Jolly' I particularly enjoyed the introductory plea made by Meggendorfer to the children who might play with the book:

"Within this book, my own dear child,
Are various pictures gay,
Their limbs they move with gestures wild,
As with them you do play.
But still they are of paper made,
And therefore, I advise,
That care and caution should be paid,
Lest woe and grief arise;
Both you and pictures then would cry
To see what harm is done,
And sigh would follow after sigh
Because you've spoilt your fun." 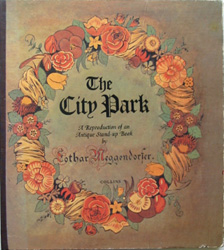 My favourite moveable in the book is the very first one of 'The Angler'. The image is most believable - when you pull the tab you see the Angler heaving with all his might to land the very large fish without falling over the fence and into the water himself!

Meggendorfer passed away in 1925 leaving a lasting legacy in the form of his ingenious moveable books.